Report: Rashod Bateman Wants to Return to the Minnesota Gophers 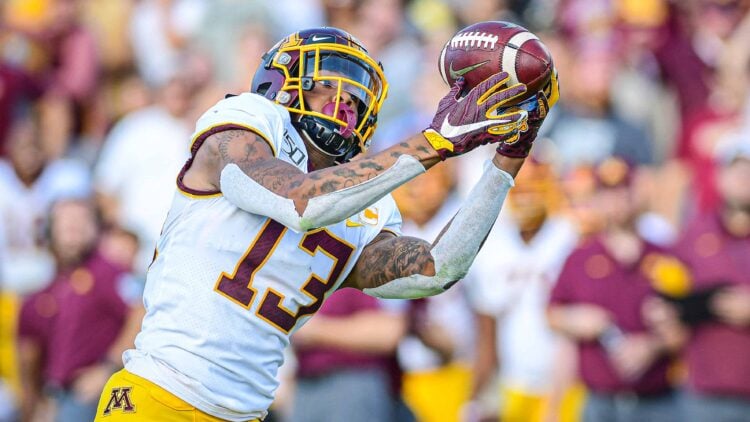 Rashod Bateman reportedly wants to continue his football career at the University of Minnesota. Bateman was one of the first opt-outs of the season, back in August. This is huge news and it’s the first that we’ve heard of Bateman wanting to come back, now that the 2020 fall football season has been reinstated! We already know PJ Fleck is doing what he can.

Source: Minnesota star WR Rashod Bateman wants to play for Gophers in 2020. He’s back on campus and enrolled as a full-time student. He’s signed with agent and finds himself in the same scenario as other high-profile players around the country.

I’ve heard a lot of, “he’s already signed with an agent so he cannot come back”. Well guess what, the entire Big Ten and many other conferences around college football cancelled their entire season. If the NCAA can’t backpedal these opt-outs into opt-ins, then that is an NCAA problem.

I don’t care that Rashod Bateman hired an agent. Nor do I care that he may or may not have accepted professional benefits. He thought his college career was over so what else would he do? The NCAA needs to reinstate all of these opt-outs. They really can’t afford the public backlash, if they don’t.

If you are looking for precedent, you can find him at Arizona State University. Their punter, Michael Turk, declared for the 2020 NFL draft, hired an agent, went undrafted AND WAS STILL LET BACK INTO ARIZONA STATE, citing the coronavirus pandemic as why he didn’t get drafted.

If he can go all the way through the draft and still return to CFB, then Rashod Bateman better be allowed to play for the Minnesota Gophers too.

Megan Ryan of the Star Tribune is reporting what Rashod Bateman accepted from his agent, Blake Baratz, after opting-out of the 2020 season. He now wants back in and most believe he will have to pay back anything he’s accepted. The list of “benefits” doesn’t look like anything overwhelming. A dollar value wasn’t mentioned.

Baratz said in the past two days, he provided the Gophers and the NCAA with information, including what the agency provided Bateman. IFA advanced Bateman some money, including paying for his housing, rental car and training the past six weeks.

Bateman will probably have to pay that back, Baratz said, though he acknowledged this is a first for him, and he’s not even sure what the process entails or how long it will take.