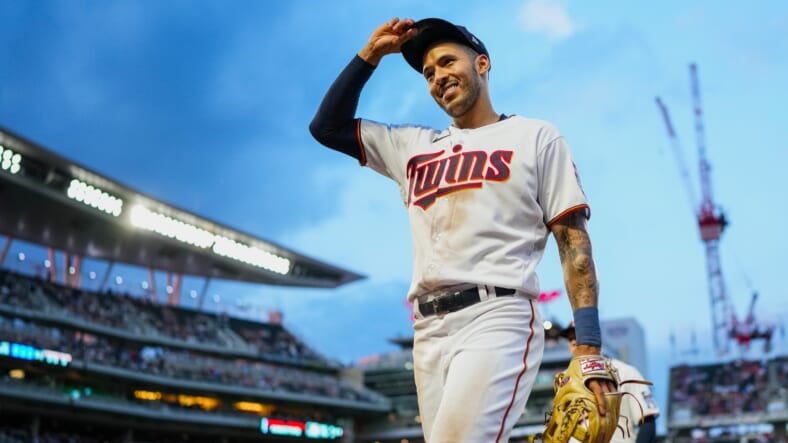 Carlos Correa was signed by the Minnesota Twins in the wee hours of March 19, 2022. Astonishment spread quickly through the baseball world that Saturday morning, as Twins fans woke up to, by far, the most shocking free agency news in franchise history.

In many ways, Correa has lived up to and even exceeded expectations. His leadership is something I’ve never really witnessed on an MLB baseball field. Never have I seen a shortstop who initiates more mound visits than the catcher and pitching coach combined.

And all season long, he’s been pretty consistent. A smidge under his usual expectations, as a whole, but absolutely rock solid. A top-5 shortstop league-wide, factoring for both offense and defense. Yet, something was missing.

It seems almost impossible to be this awful. One of the most clutch hitters of his generation just giving the #MNTwins nothing.

While with the Houston Astros, Carlos Correa became the latest version of Mr. October. A nickname first given to Hall-of-Famer, Reggie Jackson, for his postseason greatness with the Oakland A’s and New York Yankees throughout the 70’s and into the early 80’s.

Since then, it’s become an imaginary award unofficially distributed to only the most clutch playoff performers. But Mr. October isn’t an award that can be earned in just one postseason. It takes many successful playoff runs and must be paired with some semblance of playoff success.

What has Correa done to deserve such a title? Well, at 27 years old, Carlos Correa surpassed Reggie Jackson in playoff plate appearances, with 334 (79 games). But it isn’t about the experience, it’s about results. And man, has Carlos produced.

Carlos Correa has 17 postseason homers and he’s only 26 years old.

But that was Carlos Correa before he got to Minnesota. One of the most clutch performers in MLB history, and with plenty of time to leave an even bigger mark on the game. In the <1 season he’s been in a Minnesota Twins uniform, Correa has underperformed in big moments..

Entering Sunday’s contest vs the Chicago White Sox, 2022 Correa was hitting just .259 with 0 HR and just 5 extra base hits with runners in scoring position. His OPS just .675. Big moment after big moment, Carlos Correa has failed to prove himself as one of the most big moment players in Major League Baseball.

On Sunday afternoon, however, Correa had two huge hits. A 5th inning home run put the Minnesota Twins up 2-0 and a 9th inning double should have scored another run, had Billy Hamilton not tripped rounding 3rd base. No matter, because Jose Miranda hit both Hamilton and Correa in during the next at-bat.

Thus another reason why Correa’s clutch success is so important. The rest of his teammates clearly look up to him. When he hits in clutch moments, it pushes his teammates to do the same. When he struggles, they tend to struggle.

Byron Buxton or no Byron Buxton, Carlos Correa is the leader of the 2022 Minnesota Twins. If they are going to make any type of postseason run, Correa needs to be the best player in baseball. Someone he’s proven himself to be in many postseasons past.

But the Twins cannot wait for the playoffs. They need Postseason Carlos Correa to stick around for all of September and beyond.