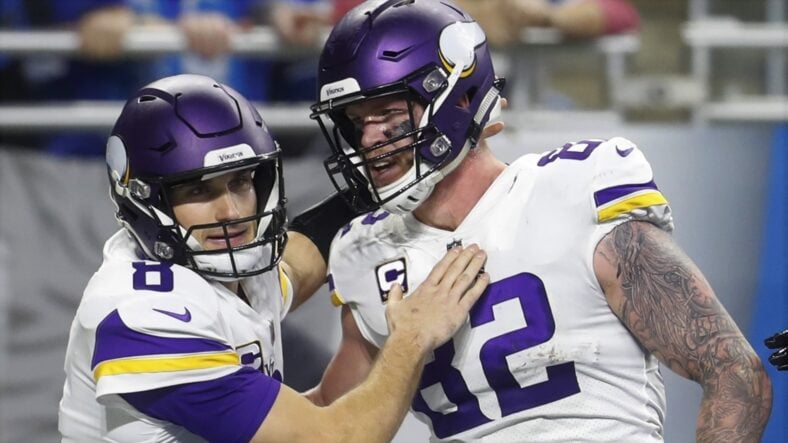 Kyle Rudolph was once an integral part of the Minnesota Vikings future. But after a consistently average ten seasons in purple, Rudolph left town to try and rediscover himself in The Big Apple (Giants). What he actually discovered was the worst statistical season of his career (257 Yds, 1 TD).

Rudolph Begs for Return to Minnesota

So now, Kyle Rudolph wants to return to Minnesota. At least, that’s what he told Paul Allen (KFAN Radio) on Tuesday (33:25 mark – transcribed below). His quotes read like a desperate ex-girlfriend who’s realized her mistake.

PA: “Would you like a chance to play [in Minnesota] again, maybe even next season?”

Rudolph: “Absolutely. Umm, I said it when I left here that Minnesota is always home. That’s never been brought to my attention more than when we came back from New Jersey after last season. Whether it’s at the grocery store in Wayzata or at a Timberwolves game…”

“Just being around town after being gone and the amount of people who come up and say ‘I wish you were still here’, or even before I was released in New York, ‘You have to come back here’. Just the amount of love that myself and my family have gotten from people around the state. It’s really kind of opened our eyes by how admired we are by Vikings fans and the amount of love they’ve shown us over the last decade of our lives here.”

“So certainly for me, as I mentioned in the previous segment, there’s still one thing left to do here. And that’s to win a championship in Minnesota. So obviously, I would love an opportunity to have another crack at it. I’ve talked about being very calculated in my next decision, in terms of where I want to go. You know, I’ve never won a Super Bowl. I’d love to hoist the Lombardi at some point in my career, before it’s all said and done. I do believe that this Vikings team has a chance to do that so, certainly, I’d be open to [signing with them].”

Not only did Kyle Rudolph profess his desire to return to Minnesota, while on the radio Tuesday, but he became the most recent former Viking to walk back prior transgressions committed against Kirk Cousins. No, he didn’t go Everson Griffen on Twitter and savage Cousins in front of the entire internet.

But when Rudolph left town, he did write a 2000+ word thank you letter paying homage to everyone he had ever associated with, while in the state of Minnesota, and never mentioned Kirk Cousins. On Tuesday (41:30 mark above), Rudolph claimed that Cousins’ omittance happened because the two of them weren’t the greatest of friends.

“A lot has been brought up about my letter and not mentioning Kirk in it. But I mentioned, you know, Teddy [Bridgewater] and Sam [Bradford]. But those are guys that I was extremely, extremely close with.“

I’m not sure how that was supposed to help Kyle’s case to return, or repair his relationship with Kirk Cousins. But, it appears that’s what he was going for. Rudolph continues:

“I have no ill will or hard feelings. Kirk is a phenomenal quarterback and he’s been unbelievably successful. Especially if you look at his statistics since he became a starter. Same thing, he’s knocking on that door and I know a deep playoff run and certainly a championship would put him right up there with everybody else in this league. There’s definitely no ill will there, between him and I.”

Those “Lombardi” and “Super Bowl” comments play well when written about by friendly local columnists but how much does Kyle Rudolph actually help a team achieve their Super Bowl dreams, at this point in his career? Probably, not much.

One could argue whether or not Kyle Rudolph ever reached his potential with the Minnesota Vikings but his numbers tell most of the story. He posted just one season with over 700 yards receiving and it took 132 targets to get there.

Rudolph was, for the most part, on the field while wearing a Vikings jersey. That means something. And his longevity helped him climb to the top of Minnesota’s tight end record books. He’s caught twenty more touchdowns (48) than any other Vikings tight end in history and sits second, behind Steve Jordan, in TE receiving yards, with 4,488.

Kyle was active in the community and showed a willingness to change his game mid-career, becoming a better blocker, for the betterment of his team and his future. But at this point in Rudolph’s career, the money spent on his veteran minimum contract would be better allocated elsewhere.

I’ll always remember that Kyle Rudolph was able to make Christian Ponder, at times, look competent. For that, he should be celebrated.

I was watching a Christian Ponder highlight video I made in 2012 (that’s for another time) & was reminded of this play where Ponder has AP wide open on the end zone, no one within 15 yards of him, and throws a fadeaway jump ball to a contested Kyle Rudolph.