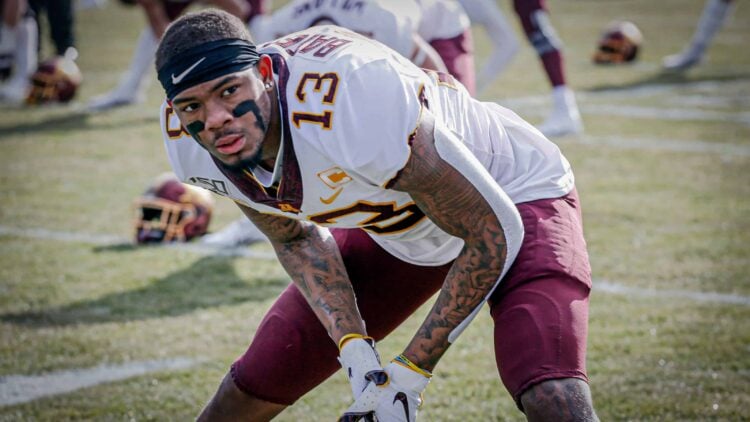 In 2019, Rashod Bateman had the best Sophomore season ever posted by a Minnesota Gophers Wide Receiver. He put up an insane line of: 60 catches, 1219 yards, and 11 touchdowns. This all came while playing second-fiddle to Tyler Johnson (kind-of), who was drafted in the 2020 NFL Draft and holds most University of Minnesota receiving records.

With Johnson now in Tampa Bay ready to catch passes from Tom Brady, the WR1 crown back at TCF Bank Stadium is still in good hands. After the 2020 season though, Rashod Bateman won’t only wear it for the Minnesota Gophers…. but he’ll be crowned WR1 for the entire NCAA. There are many great returning college wide receivers, but Bateman is poised to be the cream that rises to the top of that talented 2021 crop.

Behind Rashod, will sit Chris Autman-Bell and (likely) Demetrius Douglas. Both are solid wide receivers, but with a 1,318 yard and 13 touchdown hole left by Johnson, Bateman will likely have to help fill that void.

As a WR1 for the Gophers, opposed to a WR2, the Junior star should naturally get more targets. Johnson caught 84 balls last season, opposed to Bateman’s 60. If you project 24 extra WR1 receptions to Bateman’s total last year as a WR2, and bring his other stats along by the same percentage increase, he would post an insane stat line of 84 catches, 1705 yards and 15 touchdowns.

According to Sports Reference, that would put Rashod Bateman at 27th all-time for most receiving yards in a single D1 college football season.

Unbelievably, he already ranks 8th on the Minnesota Gophers’ all-time receiving yards list and sits less than 1,400 yards behind career leader, and former teammate, Tyler Johnson. Johnson played for 4 years. With my realistic projections above, Bateman would pass Johnson (by over 300 yards) after just 3 season. His 15 projected touchdowns (above) would also bring him within ONE score of Tyler’s career TD record, too (33)

Rashod Bateman is likely the best route runner in college football for 2020. He has a knack for creating space during his routes, which frees him up for big gains down the field. Think near-Stefon Diggs level route-running ability.

PFF College: There may not be a better route runner returning to college football than Rashod Bateman.

Impressively, Rashod combines his speed and route running to create the most lethal of combinations for opposing defensive backs to counter. Good luck.

Bateman isn’t a one, or even two-trick, pony. It’s one thing to be fast and run good routes. It’s a-whole-nother thing, to have great hands as well. According to Pro Football Focus, he was top-20 for contested catch-rate in the NCAA last season. I mean, how much more evidence do you need?

Is seeing believing? Open your eyes and just look at the difficulty of these three catches…. I only wanted to choose two videos to show you, but I couldn’t decide which to pick, so you get three eye-popping grabs from Rashod Bateman.

Is there anything Rashod Bateman can’t catch? pic.twitter.com/I2i6DKmTqS

Unsurprisingly, Bateman boasted an outstanding 20.3 yards per reception with the Gophers in 2019, which landed him at 8th for all college wide receivers. This shows not only his ability to catch the deep ball, but to also gain yards after the catch. He operates well at all levels of the field, which is a unique skillset.

Expecting his downfield stats to fall off next year? Don’t count on it, as long as Tanner Morgan is still his quarterback. Tanner sat near the top of the NCAA in all downfield statistical categories last season, just like his now undisputed #1 WR. Their chemistry and connection on the field should only improve over time.

If Tanner Morgan's biggest criticism is his "arm strength" or, my personal favorite, "arm talent"…

Add in new OC, Mike Sanford, who likes to go downfield even more often than Kirk Ciarrocca… and 2020 should be a wild ride. Here is what Gopher Football insider (247Sports – Gopher Illustrated) Ryan Burns had to say about what the revamped offense could look like.

I could see a little of Sanford’s power offense with deep shots that work off of that power offense built in.  Expect the backs and Rashod Bateman to have big, big years.

Realistically, Rashod Bateman is a guy that can do whatever the Minnesota Gophers ask of him, as a wide receiver. He can operate inside or outside and he’s a threat on screens or down the field. He makes one-handed diving catch, snags every contested ball and makes fast people look… not fast. The Georgia-native is truly a game-changer.

Don’t forget that Bateman will return to the U of M with his QB1 from last season, Tanner Morgan, manning the offense.

Now, with the speed, route running, athleticism, hands, and IQ of an elite college wide receiver, Bateman is poised to be the best of a talented bunch next season.

Multiple sites have Rashod inside their top-10 returning college wide receivers, for 2020. Pro Football Focus, ESPN, and 247Sports all have him at 3, while Bleacher Report has him 8th. Pro Football Network has him ranked highest at 2, only trailing Big Ten foe, Rondale Moore (Purdue).

I fully expect Bateman to come into the 2021 NFL Draft as the number 1 wideout, when the dust settles on whatever this 2020 season ends up being. If that’s the case, and he does have a season that vaults him to the top WR of his class, who knows what kind of noise the Minnesota Gophers make on college football over the next 6 months…