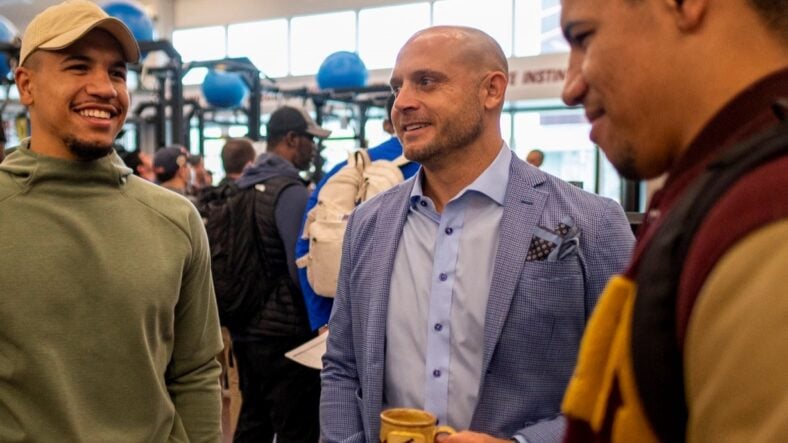 What’s up with PJ Fleck’s face? Since resurfacing this Spring for the start of Minnesota Gophers football practices, that’s the question social media has been asking. It was a bit difficult to pinpoint exactly what had been done but something was clearly different. He’s also started wearing glasses on a more regular basis.

Call me crazy … but did PJ Fleck get work done in the offseason?

But on Monday evening, Chip Scoggins (Star Tribune) got the scoop, reporting that Fleck is recovering from eye surgery he underwent in the offseason. PJ tells Chip that the surgery was to repair an injury he suffered in a 2019 bungee cord accident, while securing something on the dock of his Lake Minnetonka home.

In July 2019, Fleck and his two sons were on the boat dock at their house. They were securing something with a bungee cord when it snapped back, and the hook struck Fleck in the face near his eye, causing a “pretty serious injury,” he said.

“I was finally able to get it fixed in January,” Fleck said. “I’m still in the healing process for a few more months, but I appreciate everybody’s concern.”

Just got off the phone with Gophers coach P.J. Fleck. He knows that people are aware of his appearance change with his eyes.

He explained situation — He had an accident in summer of 2019. A bungee cord flew back and hit him in face and he had surgery in January to fix damage.

I’m sure this explanation will create some controversy of its own. Fleck wouldn’t get specific on what his injury was or what procedure he underwent, other than noting it was “pretty serious”. He blamed the two-year gap, between the incident and operation, on the busy life of a football coach combined with a pandemic.

Nobody noticed Fleck’s 2019 face/eye injury, until after he had it operated on this winter. That doesn’t mean his explanation is illegitimate. It just makes the entire situation more intriguing. PJ says he feels “way better” since the surgery.