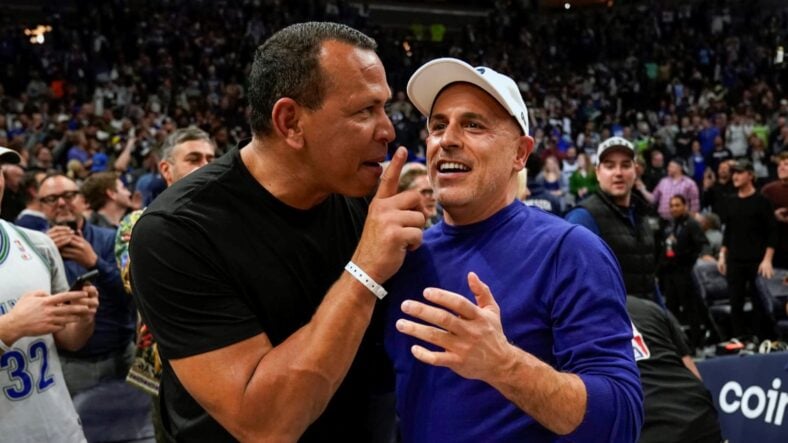 The Minnesota Timberwolves are going big game hunting in their search for a new President of Basketball Operations. Sure, ‘Trade Machine Guy’ — Sachin Gupta — was fine as a long-term interim, but new ownership partners, Alex Rodriguez and Marc Lore, are out to make a headline stealing hire to lead their latest high-profile business venture.

Problem is, top-tier Presidents of Basketball Operation aren’t standing on the street begging for work very often… or ever. To acquire such talent, the Timberwolves need to convince an already established PoBO to ditch his current organization, in exchange for an office at Mayo Clinic square, during Minnesota winters.

Marc Lore and Alex Rodriguez put together a list of five POBOs to target shortly after purchasing the Timberwolves, sources say.

Tall task? More like impossible. But that isn’t going to stop Lore and Rodriguez from trying. Latest reports have them highly interested in five of the league’s most established and respected front office leaders, and already in heavy discussions with Denver Nuggets President of Basketball Operations, Tim Connelly.

How to Acquire a Top PoBO via Hostile Takeover:

The other four executives of interest are Masai Ujiri (PoBO – Raptors), Daryl Morey (PoBO – 76ers), Bob Myers (PoBO – Warriors) and Sam Presti (GM – Thunder). Most of the reported candidates would be making lateral moves, to an organization collectively seen as a massive downgrade.

The Timberwolves are in serious talks with Denver Nuggets president Tim Connelly about the franchise’s vacant President of Basketball Operations role, sources tell The Athletic. The Timberwolves recently requested permission from the Nuggets to speak with Connelly, and the sides have moved beyond exploratory conversations, sources said.

How can the Timberwolves acquire an already active President of Basketball Operations from another organization? Great question. First, they will have to pay a lot of money. Like, a lot more than what said front office executive is making in his current, and cushy, chair.

Rumors also include a possible stake in franchise ownership. In his latest “The Scoop” episode, Darren Wolfson even mentioned the front office acquisition possibly costing future draft pick compensation. But no matter how it goes down, however, stealing another organization’s President of Operations is rather unchartered territory in the world of professional sports.

And because of its unprecedented nature, especially for this market, many local fans and media members are nervous. Sachin Gupta is the obvious, and safe, choice for the job. He’s already been the acting as Wolves PoBO for an entire season.

Plus, Gupta is well-known enough (Trade Machine Guy) for this market, and he’s definitely respected in league circles. He’s paid his dues and is very deserving. Hell, give Sachin credit for getting the Minnesota Timberwolves organization to a level of internal peace and tranquility that we probably never seen.

Could this be a situation where new owners enter the fray trying to inject life at the wrong time, just to ruin what was going to be a good thing? Maybe… but front office talent doesn’t grow on trees. So if the Wolves can pull off a PoBO heist of an already established name, the payoff could be tenfold in the near future.

How long have Minnesota sports fans been begging for more boldness and calculated risk out of their professional sports teams? How often have they fallen short of expectations in free agency, during trade seasons or when hiring new leadership?

We’ve become so accustomed to settling for ‘the best of the rest’ that swinging for the fences feels, somehow, unsettling. So, even if it’s only this one time, instead of allowing such anxiety to get the best of me, I’m going to take a deep breath, stand back and applaud Alex Rodriguez, Marc Lore, Glen Taylor and the Minnesota Timberwolves for their courage. With big risk, comes big rewards.

If A-Rod and Lore are willing to go this far for a top President of Basketball Operations, then imagine what they’ll be willing to do to in order to win at a high level. And as Minnesota sports fans, we deserve an ownership group finally willing to do WHATEVER it takes. Even if we haven’t realized it yet.