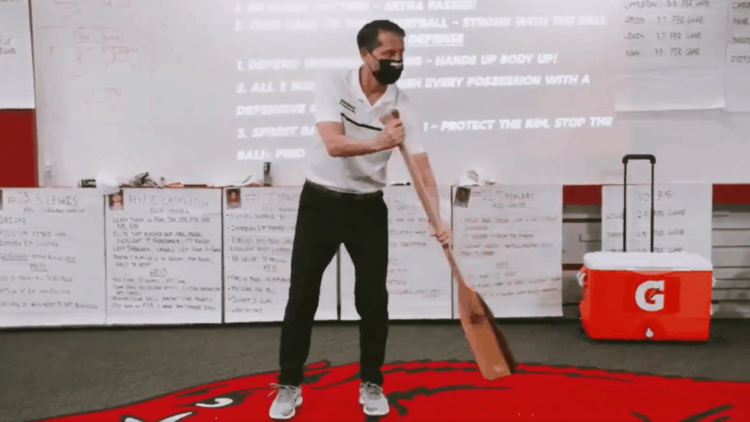 Minnesota Gophers head football coach, PJ Fleck, has given some of the most spine-tingling pre and postgame speeches known to sports history. They often include his patented “Row the Boat” phrase, which he uses as a life metaphor. I’ve witnessed some of the best postgamers in-person but his best work is done in the locker room, before hitting the pre-game tunnel.

If this PJ Fleck speech doesn’t make you run through the nearest wall then you probably like losing as much as Scott Frost. pic.twitter.com/kX147KHLE5

Most can’t do it like Fleck does and you don’t have to coach like PJ to be successful. Some will undoubtedly try, however. One of those attempts was posted to Twitter this afternoon and the attempt came from someone whose name might ring a bell.

His team was getting ready to play the SEC rival, Florida Gators. Sure, his delivery needs work… but it worked. And of course, Musselman’s #24-ranked Razorbacks came out victorious.

Loved how our guys rowed the boat together last night. Stayed in unison and played for 40 minutes. Borrowed the pre game speech idea from @Coach_Fleck pic.twitter.com/NS2U5TJsq6

Learn and get better next time…

If Musselman is going to try a “Row the Boat” speech, he has to be more committed. It’s not the type of thing you can be on the fence about. Hopefully, he and PJ can get on the phone and go over some things he can improve on next time.

Hell, I’ve already had a bunch of people in my mentions trying to get Mark Coyle to fire Richard Pitino and hire Musselman to come here. If that were to happen, he’d have plenty of time to learn from the best.

Honestly… the more research I do on Eric Musselman, the more concerned I get about him and PJ Fleck on the same campus.

Eric Musselman pulled up to the Nevada locker room without at shirt on 😂😂😂pic.twitter.com/T5LUzyl6TF