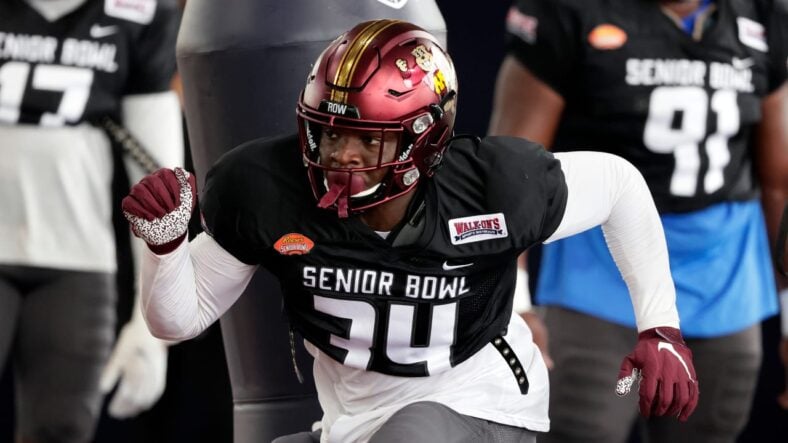 EDGE, Boye Mafe, and OT, Daniel Faalele, were the two Minnesota Gopher football players who took part in the Reese’s Senior Bowl on Saturday afternoon. But it was Mafe who stole the show and, arguably, pumped his draft stock the most out of all participants. When the dust settled, he had 2 sacks, a forced fumble, 3 tackles for loss and was named the Senior Bowl National Player of the Game.

But the Senior Bowl isn’t just about one game. It runs for an entire week, giving participants the chance to work with, and impress, NFL scouts and coaches. And impress is exactly what Mafe did. Media members covering the game could not get enough of Boye Mafe. He absolutely crushed his interviews and spent the week running around some of the best offensive tackles in college football.

The Atlanta Falcons are showing a lot of interest in spending one of their three top-60 picks on Mafe but they aren’t the only ones. The Chargers, Giants and Jets (whose head coach Robert Saleh led Mafe’s “National” team) could all be high on the former Gopher outside rusher.

Don’t expect Boye Mafe’s rise to slow anytime soon. Next up is the NFL combine, which Mafe was built for from the inside out. Just like he did at the Senior Bowl, Boye will impress coaches and league front office executives in both the underwear Olympics and the interview room.

If Mafe’s stock is rising into the first round already, imagine where it’ll be by the time the combine comes to a conclusion and the Gophers hold their Pro Day. By then, every team will have gotten a chance to talk with and watch him finish near the top in every drill he’s put through. So if you’re looking to invest in draft stock, put all of your chips on Boye Mafe.

How High Can He Go?

EDGE is one of the strongest positions in the 2022 NFL draft but, as Ryan Fowler (The Draft Network) points out, there is no limit on how far Mafe can rise.

A physically imposing defender from the opening kickoff, Mafe flashed an array of pass-rush moves, counters, and an ability to anchor in the run game all game long. One of the “freak” athletes in college football who’s expected to jump north of 40 inches in the vertical at the NFL Scouting Combine, Mafe single-handedly made himself a substantial amount of money with his showing on Saturday afternoon.

Whether he was bending the edge with speed, bull-rushing with brute force, or providing a counter to the counter from opposing offensive tackles, Mafe’s deep bag of traits have him on the rise heading into the combine, pro days, and separate team workouts over the next few months. Although Michigan’s Aidan Hutchison, Oregon’s Kayvon Thibodeaux, and Purdue’s George Karlaftis have headlined the group (among others), the play of Mafe not just in today’s game but throughout the week as a clear winner in one-on-ones and team drills forces us to now to ask the question: How high can he go?