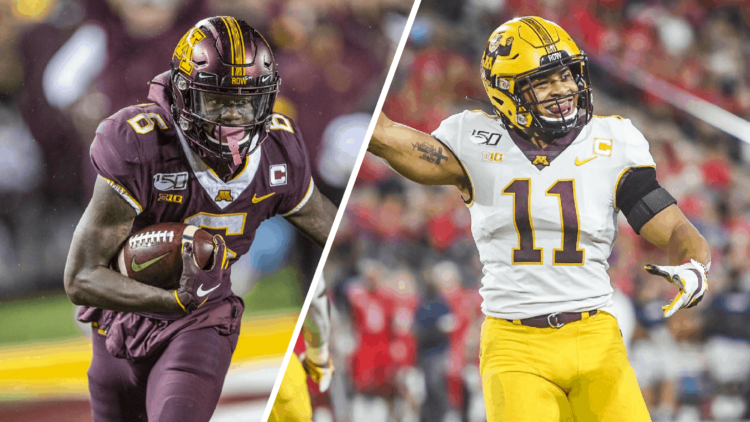 Both Antoine Winfield Jr. and Tyler Johnson will go down as two of the best Minnesota Gophers to ever put on football pads. This week, they add to their already-packed college trophy cases. The Big Ten Network named both Gopher legends to their B1G All-Decade Team. The team was voted on by a panel consisting of writers, studio hosts, commentators and former coaches (among others). The names are being released throughout the week.

Former @GopherFootball star S @AntoineWJr11, the B1G’s top DB in 2019, is the latest selection to the secondary of the 2010s.

? #BTNAllDecade moves to the Hands Team ?

And it's hard to argue with picking @GopherFootball's hometown hero. @T_muhneyy10 has been voted one of the two best WRs of the 2010s.

Antoine Winfield Jr. has piled up the awards, since arriving on the University of Minnesota campus in 2016. He’s been named 1st Team All-Big Ten Team, was a unanimous All-American, won the Tatum-Woodson Defensive Back of the Year, won the Carl Ellis Award for top Outstanding Defensive Player, and has been Academic All-Big Ten for three years, from 2017-2019.

During his career in maroon and gold, Winfield tallied 177 tackles (126 solo) and 9 interceptions overall. The Woodlands, Texas native also recorded 58 solo tackles and 7 interceptions this past season, the latter of which was 4th nationally in 2019-20 and a single-season school record.

“You look at a decade team, in the Big Ten, I’m like, ‘Wow.’ It’s just an incredible accomplishment.”@GopherFootball great @AntoineWJr11 sits down with @BTNRickPizzo to discuss his #BTNAllDecade honor.

“It was incredible. I was just excited to be honored in that way,” Winfield said to BTN’s Rick Pizzo. “You look at a decade team — in the Big Ten — I’m like ‘Wow.’ It’s just an incredible accomplishment.”

Tyler was the best athlete at Minneapolis North and he showed that staying home and working hard can pay dividends. He moved from quarterback to wide receiver, when he arrived as a Freshman, and made himself one of the best route runners in the nation by the time he left.

Now, he's a member of the #BTNAllDecade Team.

Tyler Johnson (@T_muhneyy10) sits down with @BTNRickPizzo to discuss the honor, and much more.

In 2019, both Winfield Jr. and Tyler Johnson helped lead the Gophers to their first 11-win season in over 100 years. They both had huge games in an Outback Bowl win over Auburn, too. So far, they are the only two players to make this list.

Both Tyler and Antoine will move into the NFL next season. They will do it together, though, as both were drafted by the Tampa Bay Buccaneers in the 2020 NFL Draft. The Bucs picked Winfield Jr in the 2nd round and Johnson in the 5th. Both were steals at their draft slot. Reps from the Bucs watched the Outback Bowl in person and had to have both, by the time it was over.

Hats off to both Antoine Winfield Jr and Tyler Johnson, for two ELITE careers in Minnesota.