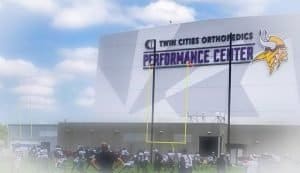 Yesterday I had the chance to attend Vikings Training Camp at Twin Cities Orthopedic Performance Center. For the last several years, the Vikings have had training camp at Minnesota State University Mankato and had their team headquarters at Winter Park. But with the construction of US Bank Stadium it made sense to build a new team facility as well. And, just like they did with U.S. Bank Stadium, they definitely knocked it out of the park.

The first thing we saw up close was the media area; which featured individual cubicles for media members to write stories in comfort. Media all over the state and country should be jealous. The facility also boasts individual interview rooms and a large conference room with additional seating.

After checking in and recording a few interviews for KLGR and The Scoop (stay tuned today for those), it was time to head off to the practice field. TCO also offers a beautiful mini-stadium for game action. The Vikings hope to be able to host high school football games, in the near future, from TCO Stadium.

From there, the Vikings have 2 conjoined practice fields, which is where most of the action took place. There was enough room for both the Vikings and Jaguars to start practice individually, before they both joined forces for the majority of practice. Right as you walk onto those fields, you notice the incredible new team weight room. It has doors that open to allow for an open-air feel, when the weather is nice.

Here is a look at TCO and all of its glory:

Practice went on without a hitch, and I came away with a few observations:

– The Vikings’ defense was definitely ahead of the Jaguars‘ offense. Jaguars QB, Blake Bortles, had several balls that should have been INT’s if not for drops by Vikings defensive backs.

– Anthony Barr continues to get work as a defensive end, and after being held out of camp with various injuries, was a participant all day.

– The Vikings offensive line all participated all day (Elflein off to the side – still on PUP) with the exception of Rashod Hill.

– It is impossible to tell that Dalvin Cook is coming off of an ACL surgery. Cook had several explosive runs (and great holes to run through) behind the Vikings o-line.

– Stefon Diggs had an absolute-filthy catch and juke move, leading to a touchdown against the Jaguars defense. The rapport between Diggs, Thielen, and Cousins makes you think the 3 have been playing together for a decade.

– Mike Hughes continues to be very impressive, and is already very sound in his technique. Looks like the Vikings got another late-first-round steal when they drafted him.

– NFL players are MASSIVE up close. I was within 5 feet of several offensive lineman during a drill and they all seemed at least 2 feet taller than me…

– NO FIGHTS OCCURED! Both teams got some hits in yet no one came to blows, although the Jaguars were without 2 of their biggest instigators.

After getting the chance to check out the TCO Performance Center, it becomes pretty obvious how big of an advantage these facilities can be for the Vikings. With everything  in one spot, they’ll be able to better track player rehab and the facilities will be a huge help in recruiting free agents. This was the case when they signed Sheldon Richardson, who raved about the new Vikings HQ before he signed his one year deal this offseason.

It is pretty evident that the Wilf’s love this team, and it’s reflected in their home stadium, and now their new HQ at TCO Performance Center. Sure, we paid for a portion of it all but Zigi always footed the bill when things got too expensive, refusing to cut any corners at either location, and building facilities that all Vikings’ fans can enjoy for years to come. It’s nice being the envy of the entire NFL for once, isn’t it?