If Thibs Signs Derrick Rose and Gives Him ANY of Tyus Jones’ Minutes, I Swear to… 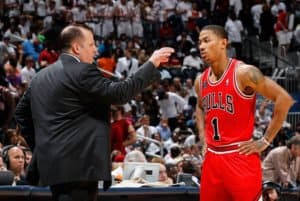 Tom Thibodeau converses with Derrick Rose #1 of the Chicago Bulls during Game Three of the Eastern Conference Semifinals in the 2011 NBA Playoffs against the Atlanta Hawks at Phillips Arena on May 6, 2011 in Atlanta, Georgia. (May 5, 2011 - Source: Kevin C. Cox/Getty Images North America)
112 Tom Thibodeau converses with Derrick Rose #1 of the Chicago Bulls during Game Three of the Eastern Conference Semifinals in the 2011 NBA Playoffs against the Atlanta Hawks at Phillips Arena on May 6, 2011 in Atlanta, Georgia. (May 5, 2011 – Source: Kevin C. Cox/Getty Images North America)

Prior to its 2PM CST trade deadline, on Thursday, the NBA was wheeling and dealing. For comparison purposes, the league was almost as active as FitBit’s newest ambassador, Andrew Wiggins.

In regards to your Minnesota Timberwolves, they weren’t involved in the asset swapping fiesta. While we stayed away like my fellow Millennials do when they receive a phone call, the Cleveland Cavaliers did the opposite. Isaiah Thomas, Jae Crowder, and Derrick Rose’, now-former employer, participated in not one, not two, but three deadline deals. Stop, Lebron. It was three trades. Not one, not two, BUT three. As for your Miami Championships? My bad. I’m salty over how he stuffed the hell out of Jimmy, and then channelled his inner Christian Laettner for the game-winner on Wednesday night. Shit happens, I suppose. Kings will be kings.

Anywho, back to the trades. As mentioned, Derrick Rose is no longer a part of the Lebron James’ run show, that is Cleveland, Ohio. Rose, who is a shell of his former MVP self, was traded to Utah. Despite the move, per reports, he won’t even touch a Jazz uniform. With the 29 year-old being released by Utah, where will he go from there? Well..

The Timberwolves will try to sign Derrick Rose if he clears waivers after his looming release by Utah, according to league sources

With Tom Thibodeau in charge, Minnesota is a natural landing spot for Derrick Rose, who has interest in a reunion, league sources say

Say it with me Wolves Nation – DAMNIT! Considering our current point guard situation, this doesn’t sound too “natural” to me. My main concern, as well as MANY others, is D-Rose cutting into Tyus Jones’ minutes. Wouldn’t that be something? It’s been a while since I’ve gone full psycho..

When it’s Super Bowl Sunday, but all you can think about is the NFC Championship Game: pic.twitter.com/Pwzh7yi1o3

As you can tell, I don’t have near the soft spot that Tom Thibodeau does for the 2010-11 NBA MVP. However, I’m by no means a Derrick Rose hater. I want him to find himself a PG job somewhere, doing something. I’d just prefer that workspace be outside of the Wolves’ organization.

What about Jeff Teague?

Let’s say it were earlier in the week, and we knew Rose would be on waivers, I would have been all for entertaining offers to ship out Jeff Teague. If you could have gotten value for our current starting PG, the thought of Jones running the show with Rose backing him up sits fine with me.

With the deadline now passed, it appears that the man brought in to be Ricky Rubio’s replacement will remain as the teams starter for the rest of the season. That’s that.

In the event MN let go of Aaron Brooks, signing Rose would mean not one, not two, but three PG’s. All of which, unlike Brooks, would expect minutes. That’s too many mouths to feed. The way I see it, Tyus Jones should already be getting larger servings. If the Minnesota native loses proverbial calories to the former Chicago Bull, to put it nicely, it won’t bode well with the fans.

Speaking of former Chicago Bulls, Jimmy Butler spent time as Rose’s teammate in the Windy City. I wonder what he thinks about all of this? Well, what do you know…  look what I found from 2015: