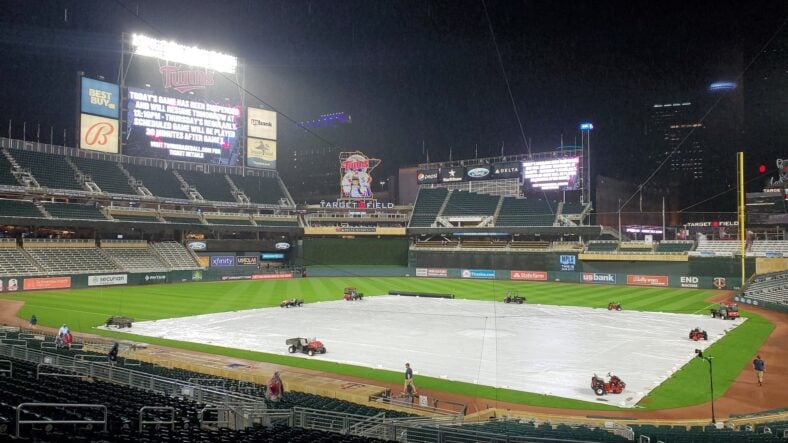 If you have power or access to a cell phone and can read this blog, I’m glad you made it through the historic storm that plowed through the Twin Cities and much of Minnesota on Wednesday night. Tens of thousands lost power. Streets across the state were flooded. Last night, life came to a halt as Mother Nature reminded us who runs the show.

Photos and videos have been spreading across the internet showing just how dire the situation was, and still is, in many places. Uptown was under water, stadiums were evacuated, new-build houses without grass were dealing with mudslide conditions and winds were recorded up near 100 MPH.

My neighbors cars are sinking under water and a mud slide from not yet having sod or driveways @WCCO @DelanoMN @WrightCountyMN #delano #tornado #Minnesota #wrightcounty #newconstruction pic.twitter.com/1NwuFCp2iu

When the chaos subsided, only one location in the Twin Cities stood tall, in wake of nature’s shelling. Target Field, with its state of the art drainage system, remains undefeated vs any amount of water that’s ever been dropped on it. That’s a 12-year streak. Quite impressive.

Target Field conquering one of its toughest weather-related tests to date was no fluke. Luck wasn’t part of this winning equation. We learned all about the groundbreaking water-recycling drainage system built into and underneath the stadium, when it opened in 2010. Back then, it was sold to us as another green initiative to make the hippies happy.

MN Deptartment of Health dubbed it “The Greenest Stadium in America”. What we weren’t told back then, was how well it would take on the elements, when called upon. Nobody told us that the new baseball stadium in downtown Minneapolis would double as a modern version of Noah’s Ark, if ever necessary.

“We purposely selected water as the resource for sustainability because it’s such an important resource to Minnesotans, whether they drink it or fish in it,” said Kevin Smith, the executive director of public affairs for the team.  “The Twins are taking a stand on sustainability and highlighting water.”

Clearly, Allianz Field planners didn’t factor flooding into their construction plans. The soccer stadium across the river, along with much of Minnesota, is still under water and more rain is reportedly coming. Target Field, as you saw above, was ready for baseball immediately after the storm subsided.

In fact, I’m not sure why they suspended Wednesday’s contest vs Astros until Thursday afternoon. Last night’s flash floods were exactly what Target Field planners had prepared for. It was their moment to shine. Test passed. What’s next?

Meanwhile, Target Field has already converted tonight’s rain water to drinking water and sent it to needy families around the world. https://t.co/A0f8Kzp6Dg