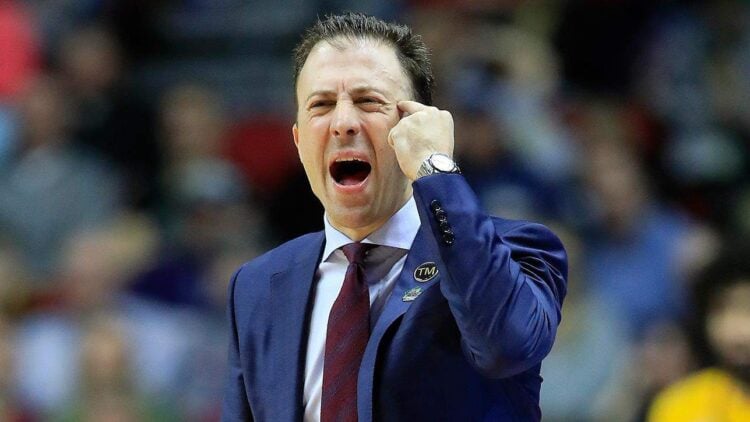 If anyone is close friends with Donald Trump, or you know someone who might be, I could use your help in the worst way. I know a basketball coach at the University of Minnesota, who badly needs a border wall built. Before you ask, let me tell you where Richard needs the border wall: AROUND THE ENTIRE STATE OF MINNESOTA. It’s sole purpose needs only to be keeping the best high school basketball players from leaving, so I don’t know if that complicates things, because it is sorely needed nonetheless.

Richard Pitino got 7 chances in the 2020 recruiting class, to convince some (or at least one) Minnesotan to stay home and play basketball for their own Minnesota Golden Gophers…. and he’s now failed to do that 5 times (6 unofficially), after missing this afternoon on Prior Lake’s Dawson Garcia.

.@MarquetteMBB has its next star player.

Just watching this is infuriating. I’m sick of watching Minnesota kids put on non-Minnesota hats. I’m going to put the list of kids that Richard Pitino has now missed on, below. The list is almost unfathomable. We aren’t even talking those like Dawson Garcia, Matthew Hurt, or Trey Jones; who all are tops in the entire nation. Pitino can’t anyone to stay.

Since landing Minnesotans; Dan Oturu, Gabe Kalscheur, and Jarvis Omersa in 2018, the Gophers are getting dangerously close to missing on 14 Minnesota kids in 2 years, who most would consider “takes” for Richard Pitino and his staff (.8600 composite rating or better). His last chance of landing someone who falls into this category is Kerwin Walton, who is a 6-5 shooting guard out of Hopkins, who hasn’t picked his school yet. The likelihood of signing him dropped (one would assume) when they landed Jamal Mashburn Jr. a couple of weeks ago.

The weirdest part about this Pitino/in-state recruit thing is that Pitino seems to do just fine around the rest of the country. He’s had some of the best recorded recruiting classes in school history.. which makes the lack of success in Minnesota even more puzzling.

Because of that recruiting success outside of the state borders, Pitino has won some games since coming to Minnesota, but it’s not like he is dunking on NCAA Tournaments year in and year out.

If Richard Pitino doesn’t make the tournament this season, I can’t imaginhe’s still here come April. He wasn’t brought here by Coyle and the “One Minnesota” narrative that Coyle and PJ Fleck are trying to push, loses steam when your most successful major sports program since the 1960’s can’t get the best (or any) in-state recruits to stay home, to be part of that movement. That’s where the problem really lies. I have the utmost confidence that Richard can pull in 3-4 star kids from around the country. He’s already proven that. However, you aren’t going to have that same success with the best 4-star and 5-star kids from around the country. What do you have to offer the best kids around the country, that others don’t?

Nothing. So, when your own state pumps out 8 of those talents in 2 years, you’d better be damn-well sure you snag a couple. And Pitino didn’t. He couldn’t get even one.

It’s not about keeping kids in-state, Richard. It’s about getting the most talented kids possible, on your team. When you coach at Minnesota, that means convincing some of the best talent that starts in-state, to stay here. Or else, you aren’t going to get that type of talent on roster. This isn’t North Carolina. Kids on the other side of the country aren’t coming here to lead the Gophers.

But, we grow plenty of that talent here. Keep it here.