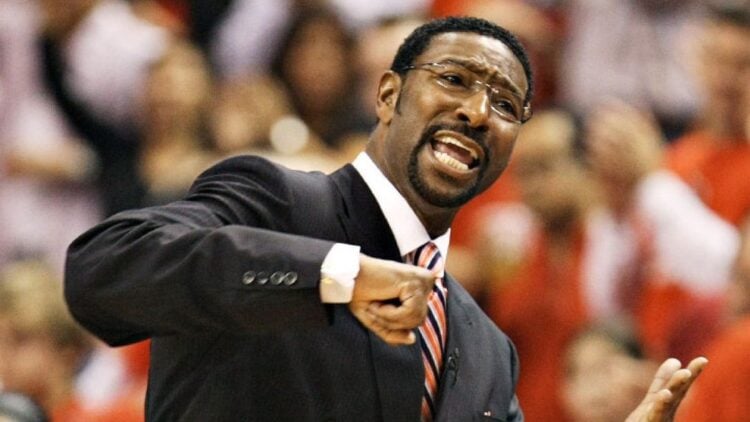 The Minnesota Gophers men’s basketball team lost AGAIN on Saturday, this time to the Rutgers Scarlet Knights. So, the freefall continues. Richard Pitino’s squad has now lost SEVEN straight games and 14 of their last 16. It’s been a complete freefall.

Still there is one coaching candidate we haven’t touched on. Sam Mitchell is well-known around the state of Minnesota and he is currently on the hunt for his next head coaching opportunity.

Fortunately, the Minnesota Gophers are in need of a new head basketball coach and Sam fits the molt perfectly.

I chatted with @DWolfsonKSTP for 40 minutes earlier this week about firing Richard Pitino… including some replacement options.

How about Sam Mitchell…. with Ryan Saunders on his bench? #Gophers pic.twitter.com/fbfk4pNwx4

Mitchell might not be a front-runner to land this job but he is my dark horse candidate.. Any local basketball fan knows the ties Sam has to this state.

After dominating his last final two playing seasons at Mercer College, Mitchell spent two years playing overseas, as he got his pro legs underneath him. But then in 1989, Sam was summoned back to the USA, to play for the start-up Minnesota Timberwolves in their debut 1989-90 season.

During two different stints, Sam Mitchell would play 10 of his 13 NBA seasons in a Wolves uniform. When his playing career came to an end, he was immediately hired by the Milwaukee Bucks, as an assistant. Two years later, at just 41-years-old, Mitchell was hired off the Bucks bench as the Toronto Raptors head coach.

Mitchell lasted a little over four seasons as head coach in Andrew Wiggins’ country (Toronto) and won NBA Coach of the year in 2006-07. Then, Sam landed back in Minnesota as an assistant coach in 2014-15, under Flip Saunders. After Flip’s tragic passing, Sam took over as head coach for one heartbreaking season (29-55).

Mitchell was fired by Glen Taylor after that season, who then hired Tom Thibodeau as Sam’s replacement. The rest is classic Timberwolves history.

As for Sam Mitchell, he’s been out of coaching work for a few years and isn’t making millions of dollars on the local Toronto TV broadcast scene. That makes him available, affordable and without a buyout.

But as Doogie and I discussed earlier this week, Sam Mitchell doesn’t just check a lot of boxes. He can coach and he can connect with young players. If he can grind on the recruiting trail and get the right assistant help, the career Timberwolf would be a great hire for the maroon and gold.

I can make a legit list that is 10-15 deep. The Dutcher MN out is very interesting. I'd like to know, and will dig, whether Muss has a similar out. If not, his buyout is $5M until April 30. Sam Mitchell would love the job. There's Medved, Smith, so many more names.

It’s 2021 and there’s no reason to beat around the bush on this topic. The basketball coaching community is looking for more black coaches. African Americans represent a massive percentage of pro basketball players in this country, but hold just a fraction of the coaching jobs available in both pro and college ranks.

Hiring coaches of color is an important drive for universities across the country. If the Minnesota Gophers want to become a more diverse athletic department, then Sam Mitchell makes even more sense.

He’s a great basketball coach with a proven track record and he’d become just one of two black coaches in the Big Ten, next to Juwan Howard. I would never want the Gophers to hire a coach for anything other than his chances at winning, but Sam Mitchell could win in Minnesota and check a bunch of other boxes in the process.