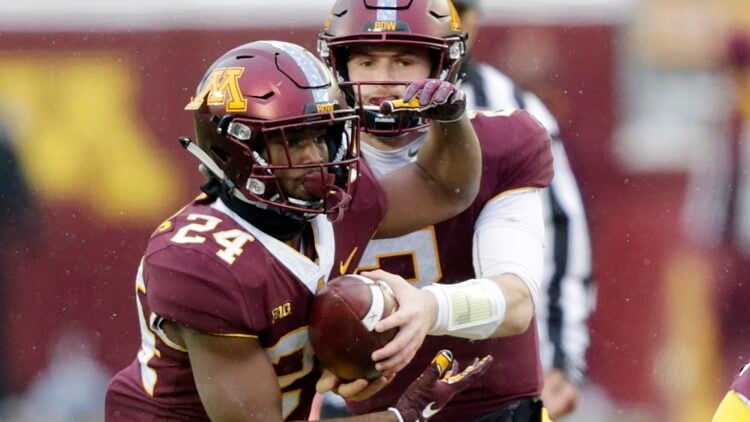 It’s the 5th of July in America and that can only mean one thing. We’re closing in on the Minnesota Gophers football team meeting for fall camp. Given the circumstances, I thought it’d be a perfect time to release an early prediction at the opening night 2021 Offensive Depth Chart.

Just over the horizon, on September 2, the Gophers will host a week 1 matchup vs Ohio State at the *new* Huntington Bank Stadium. PJ Fleck is dangerously optimistic about 2021 and part of that is due to a lot of returning weapons on offense. So let’s dive in.

Tanner Morgan took a step back last season. Parts of that can be blamed on a change at offensive coordinator, a lot happening in his personal life and the toll 2020-2021 took on the entire world. But no matter the excuse, Morgan wasn’t very good. He started all seven games for the Gophers and threw for just 1,374 yards, 7 touchdowns and 5 interceptions. That’s a big drop from what we saw in 2019 (13 G, 3253 YDS, 30 TD, 7 INT). Tanner’s future outlook as a professional quarterback could depend on a 2021 turnaround.

Behind Morgan, sits Zack Annexstad, who has plenty of experience as a college quarterback in his own right. Remember, Annexstad was the projected starter heading into the 2019 season, until an injury in fall camp prevented him from a starting opportunity. Then, Morgan used that season to cement himself as the starter. Zack returned to backup Tanner in 2020 and didn’t see any legitimate action.

Some thought Zack Annexstad should’ve gotten a bigger opportunity, given Morgan’s noted struggles last year. The pullstring could be shorter in 2021, however.

The rest of the quarterback room is full of guys I don’t expect to see the field unless injuries become a problem. Cole Kramer and Jacob Clark are still developing and Athan Kaliakmanis is a true freshman.

This is a really solid position room and it’s led by 2020 Big Ten leading rusher, Mohamed Ibrahim. Mo was an absolute stud last year, rushing for 1057 yards and 15 touchdowns in just 7 games. Offensive coordinator, Mike Sanford, has stated his preference to use a “bell cow” back, who gets the majority of the team’s carries. Ibrahim will again be that guy, but there’s a lot of youth and veteran talent behind him too.

People forget about Bryce Williams but he has quite a bit of game experience too. In 2018, as a true freshman, Williams posted 502 yards and 4 touchdowns on 117 carries (4.3 YPC) . The two youngsters, however, might have the most untapped talent of any running back in the room.

Ky Thomas was the 2019 Gatorade POY in the state of Kansas and one of Fleck’s top recruits that cycle (4-star – 90/100 Rating – 247Sports). Mar’Keise Irving won’t be outdone, however. He was one of PJ’s biggest gets in the 2020 cycle and holds an even higher rating at 247Sports (4-star – 92/100 rating). Neither kid is expected to get much run this season but the future is just as bright as the present when it comes to Minnesota Gophers running backs.

When Rashod Bateman first opted out of 2020, Chris Autman-Bell was thrust into the WR1 role around this time last year. Bateman would opt back in before the season got started, pushing CRAB back to WR2 on the depth chart. Still, he had his moments and certainly established himself as one of the better point-of-catch receivers in the Big Ten.

.@T_morg2 slings it to Chris Autman-Bell who makes an insane grab for the TD! @GopherFootball x #RTB pic.twitter.com/owtauuSSPw

David isn’t the only Bell balling out tonight.

Chris Autman-Bell with the HUGE catch to set up the 1-yard score! pic.twitter.com/kT5AGrl1pt

Chris enters 2021 as the clear leader in the Gopher wide receiver room. In his three seasons wearing maroon and gold, CRAB has 1,250 yards receiving and 6 touchdowns. WR2 and beyond is completely up for grabs. For now, Daniel Jackson holds this spot after a freshman season with 167 yards receiving on 12 catches.

Texas A&M transfer Dylan Wright, who currently sits at WR3, is the wildcard of the receiving room. Wright has the physique (6’4″, 215 lbs) and talent that doesn’t hit this campus often and his 247Sports high school recruiting profile, of 4-stars and a 95/100 rating, is a reflection of what could be below the surface. We’ll see if Fleck can pull his best out of him.

I have Ko Keift listed as the starter of this group but the top three should all get plenty of action, especially in blocking for Mo Ibrahim. It’s been a long time since the Minnesota Gopher football program actually threw footballs to their tight ends but that’s expected to change under Mike Sanford and Matt Simon.

If it does, some think Brevyn Spann-Ford is due for a breakout season.

I expect this group, with Mo Ibrahim lining up behind them, to be dominant this year. I mean, Curtis Dunlap is expected to be a future NFL draft pick and he is literally the 6th man with all guys healthy. Let that sink in for a moment. Daniel Faalele returns, after opting out of the 2020 season and both Olson and Schlueter decided to take advantage of a 6th year of eligibility.

I’m excited to see them in action come September. If they can open enough holes for Mo and keep Tanner Morgan safe, the sky is the limit for this offense.

Left tackle Sam Schlueter will be back next season, the latest Minnesota senior to take advantage of the extra year of eligibility.

If right guard Conner Olson also opts to return, the Gophers will have their most experienced offensive line in years. https://t.co/e42tydRDKW