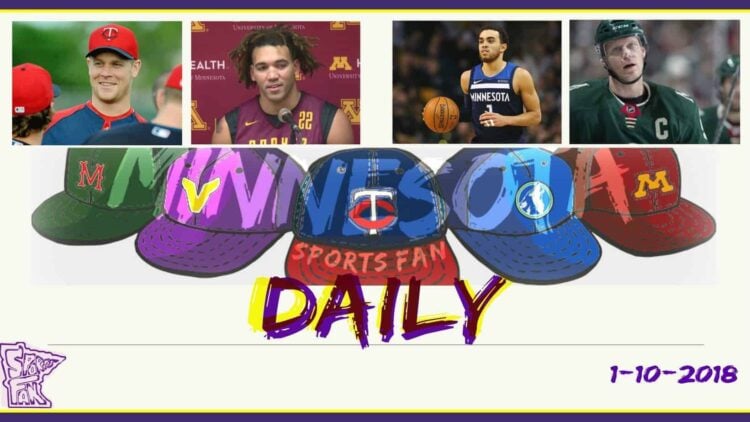 Can't wait to be back in front of our fans.#BringItHome pic.twitter.com/rQpqcQT5cM

We're taking #TransformationTuesday to a new level on @Snapchat.

Now we want you to show us what you've got!

.@stefondiggs and @athielen19 were 4th in the NFL in 2017 for most combined receiving yards by teammates with 2,125. https://t.co/i2zX0EApew

.@LataviusM and @JetMckinnon1 have picked up the load in the final 12 weeks of the season, rushing for 1,348 yards and 11 TDs.

A pair of Pro Bowlers lining up against each other is just one of the intriguing matchups for Sunday's game.

We have signed T Dieugot Joseph and DT Caushaud Lyons to the practice squad.

We have placed DT Dylan Bradley on practice squad/injured. pic.twitter.com/qMTi2FTV8L

Plenty has changed for both sides since the #Vikings took down the Saints in Week 1.

Signs of #superbowl2018 buildup are hard to miss in downtown Minneapolis as work gets started for #NFL title game. #superbowl #superbowllii https://t.co/7QDmIr6GII pic.twitter.com/zczD69kIpH

Column from @SouhanStrib: How the #Vikings (sort of) helped develop the NFC monster that is Drew Brees and the Saints https://t.co/hhzxcPAOr0 pic.twitter.com/A7Y3iqDiCS

Report from New Orleans: Why the #Vikings Week 1 victory over the Saints should be ignored. https://t.co/lq4QAU9pbQ pic.twitter.com/LSRBjmNT98

More than 100 fans bought fake tickets for the last Vikings game. How to avoid getting ripped off this weekend https://t.co/l76jgEzbvZ pic.twitter.com/0SWXRDr6RJ

NFL playoffs: #Saints are far from team the #Vikings whipped in the season opener https://t.co/z8jpGv0Bnq pic.twitter.com/wJbKvC2HWW

With the dangerous @Saints coming to town, the @Vikings could use some of that big-play magic, writes @JonKrawczynski. https://t.co/bA8Sw8Y1u0 Wild battle back before falling 3-2 to Flames in overtime https://t.co/QlDiL9Gioo #mnWild pic.twitter.com/FzTmOlGCBI

After a third-period rally, the #mnwild left another point on the table in an OT loss to the Flames. Here's @RussoHockey from St. Paul.https://t.co/Mnw8Zee5OR Wild’s Nino Niederreiter out for next week with lower-body injury https://t.co/yn0KUL4y98 pic.twitter.com/hcBPUgSgAp

Boudreau on Niederreiter: “I think he must’ve played on adrenaline. He’ll miss the rest of this week with a lower-body injury.” #mnwild

The #Gophers got their first look at the finished Cunningham Basketball Development Center this afternoon! pic.twitter.com/yUKAJtVBel

With Reggie Lynch and Amir Coffey out, who must step up for the #Gophers going forward? The answer, @Marcus_R_Fuller writes, is everyone https://t.co/rkWyOvaK8y pic.twitter.com/FJPzrFkCGh

Gophers basketball team trying to keep it together without two starters https://t.co/lNazUCBdow pic.twitter.com/SLchW9LJ9G

Gophers basketball player Reggie Lynch has been found responsible for violating the university student conduct code for sexual misconduct FOR a second time in six days, according to findings of a school investigation obtained by the Pioneer Press Tuesday. https://t.co/AZwNdTPMqG pic.twitter.com/9tmtQKoOf3

Winners of four of the last five in the series, the #Gophers visit Penn State Wednesday night in a midweek B1G clash. https://t.co/qDz9RRVAmB

Play with the best to be the best.

Huge thanks to @rachelbanham_1 and @Lindsay_13 for coming to #Gophers practice today! pic.twitter.com/YqRsyiUgjN

So far, #MNTwins' signings are underwhelming…
Tillman would be no different. Where's the splash signing?

UPDATED STORY: We are now finding out a 3rd accuser and an expulsion recommendation came earlier this week against Reggie Lynchhttps://t.co/GCCm84ux6d

#SKOL fans, watch this video and mark these notes for where these dudes are wrong (other than MJD):

Tonya Harding was the inspiration behind Bountygate

A @GopherHockey split with St. Cloud State brought an end to an in-state losing streak before the Big Ten schedule resumes. From @evegoe. https://t.co/44mIuhpw0W

Free throw with 4 seconds left lifts No. 5 Purdue to 70-69 victory at Michigan. pic.twitter.com/RKGTtTXq02

The tale of two halves. What does it mean when @TheTraeYoung has a DECENT game & still has 27 pts & 9 Ast. #Scary pic.twitter.com/tCyFpHxWKD

Unreal effort from Tyler Johnson to complete a hat trick against Carolina pic.twitter.com/oIbsP4ARXN

Former #Twolves guard @ZachLaVine to make his debut with Chicago Bulls on Saturday after recovering from ACL surgery. https://t.co/Kt84lbUMnc pic.twitter.com/F4LRDV2vNd

If you don't like LaVar Ball, just don't watch or listen. @SouhanStrib on basketball's No. 1 stage parent and those who react to him: https://t.co/yG16WJti3G pic.twitter.com/MiuhA4To2Z