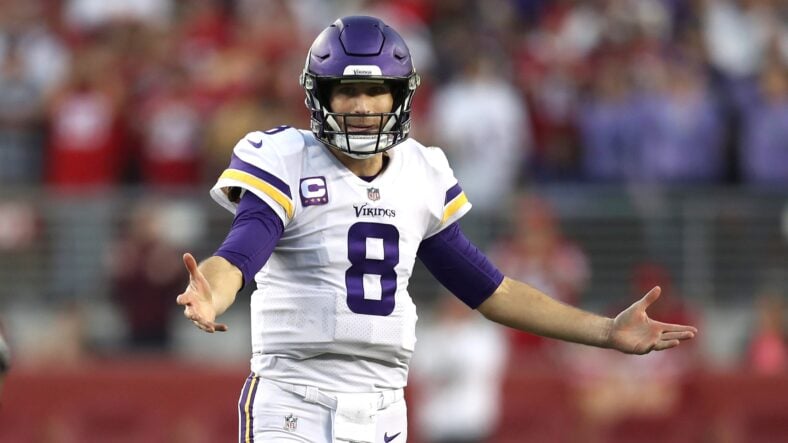 A new NFL league year starts in less than one week and will come with a fresh run on free agents. Before the Minnesota Vikings can worry about that, however, they have a full list of their own roster decisions to make.

Not only must they cut, trade-away or contractually re-adjust $15 million worth of salary by March 16 just to get cap compliant, but they’ll need $10’s of millions more in wiggle room by March 20 if they hope to use free agency to improve a defense that might surrender 90 points per week as currently constructed.

With so much to do, why are the Vikings sitting idle while most teams have been moving and shaking for days? Well, because one $45 million quarterback domino needs to fall before anything else can happen. Much like Aaron Rodgers held up the entire NFL until last week, Kirk Cousins’ contract needs to be addressed before the Vikings can decide on what to do next.

Early offseason reports across the league had Cousins destined for a return to Minnesota. And national sources have continued to push that narrative. But early on, the elephant in the room (Kirk’s contract) was portrayed as nothing but a small plastic toy that wouldn’t trip up a reunion between the two sides.

More recently, it’s become clear that Kirk’s contract, and the stern negotiating tactics he’s become well-known for, is a much larger roadblock than this new Minnesota Vikings regime originally realized. Insiders around the league remain hesitant to report that Kwesi is shopping Cousins. But as time goes on, this negotiation looks more and more like a standoff.

Kirk wants to be paid his open-market value, which could be as high as $45 million per season. Meanwhile, Kwesi & Company want contract flexibility for next season and into the future. Aligning those two goals is proving difficult and could very well be what’s jamming up negotiations, not to mention the entire Minnesota Vikings offseason.

Continue to hear from NFL execs that the @Vikings are eager to move big contracts and reset their cap/payroll. A Kirk Cousins trade would not surprise me at this point. Still plenty of needy teams. QB would need QB to extend contract. Stay tuned

The one scenario that would really really surprise me, is if the Vikings caved and give Cousins big money on an extension. I think there’s a more likely scenario where he plays this thing out, the final year of his contract, vs the Vikings giving him an enormous extension.

Are they open-minded to giving him an extension? Yes, my sense is they are. But not at enormous money. So I think that’s one scenario, at least for me, that I’m crossing off the list of possibilities.

Why would the Vikings’ decision on Kirk Cousins effect what happens with the rest of their roster? For starters, a trade would clear as much as $35 million in salary. That’s more than enough to get cap compliant. It would also allow them to make the rest of their planned cap-clearing moves, before re-assessing the QB market as a low to mid tiered buyer. Their search for a “quarterback of the future” would also intensify.

Even a Cousins contract extension could clear enough salary space for next season to get the Vikings cap compliant. And if they were to work out a deal with Kirk, it would trigger a much different outlook on their future, thus a change in strategy for the remaining offseason.

Sit tight because something has to happen in the next few days. Time is running out.