Is the 2007 Minnesota Vikings Draft Class Their Best Of This Millennium? 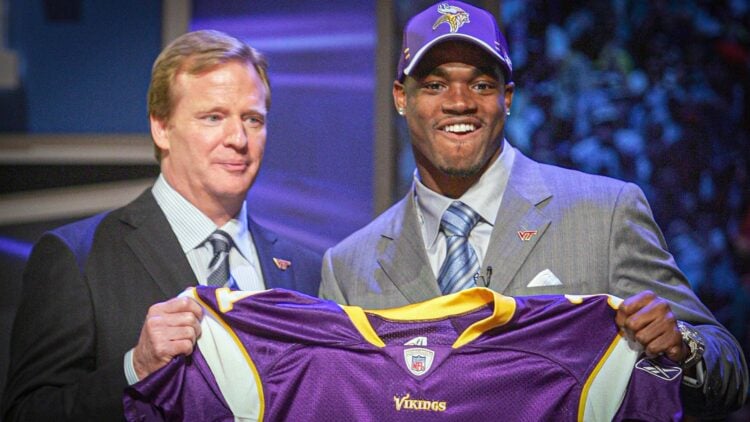 Bryan DeArdo of CBS Sports rated the 2007 Minnesota Vikings NFL Draft class as their best since 2000. That class will go down as one of the best in franchise history. That was the year we drafted all-world running back Adrian Peterson, out of Oklahoma, with the 7th overall pick.

Some of the players taken before Peterson (lol):

Peterson ran for 1341 yards and 12 touchdowns in his strong rookie season. A Pro-Bowler in each of his first 4 seasons, Peterson was also named first-team All-Pro in 2008 and 2009. The signing of Brett Favre prior to the 2009 season seemed to elevate Peterson even further. The Vikings reach the NFC Championship game in 2009 thanks largely to the 18 touchdowns Peterson contributed.

As you can see from the graphic below, the Vikings were clearly led by AP, but second rounder Sydney Rice also played a huge role in the team’s success. It did, however, take awhile for the former South Carolina Gamecock to make an impact.

During his first two seasons, Rice caught just 46 passes for a combined 537 yards. He had Kelly Holcolmb and Tarvaris Jackson throwing to him his rookie season and added Gus Frerotte to that distinctive list in 2008.

Then, Brett Favre entered Winter Park. 83 catches for 1,312 yards and eight touchdowns later, and Sydney Rice was seen on a completely different level. He torched Dallas with three touchdown receptions in the NFC Divisional round playoffs that year too. He’d never reach 1,000 receiving yards again…

The final big name in this class was fourth-rounder Brian Robison, who played in two NFC Championships for the Vikings. Through ten years in Minnesota, the former Texas Longhorn collected 60.0 sacks, which is tied for fifth with Kevin Williams on the all-time sacks list for the franchise. Of these three, Robison was the longest-tenured Viking, spending 11 seasons with the franchise, before getting cut prior to the 2019 season.

All three guys were instrumental in getting the Vikings to the NFC Championship game during the fateful 2009 season, a feat they hadn’t accomplished since 2000. The Vikings have had many impactful players drafted since 2000, but the 2007 class still stands by itself all these years later.