Gophers Row The Boat Over Illini; Defense Delivers and Mo Goes Off Again 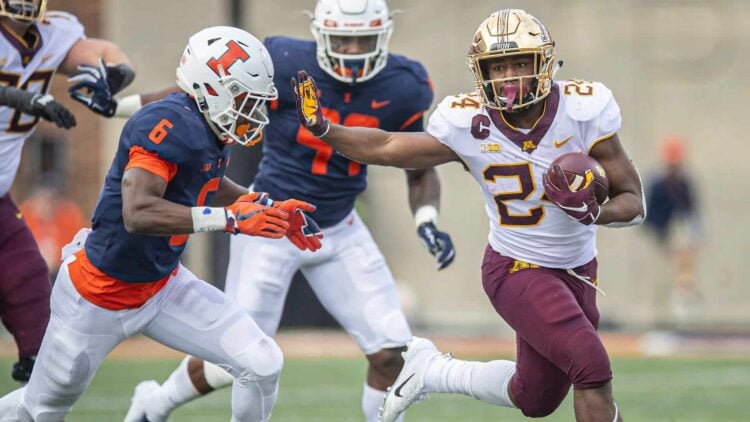 The Minnesota Gophers walked into Champaign Illinois’ Memorial Stadium on Saturday afternoon, hoping to turn the page on an 0-2 start. Well, if putting up a 40-piece on the road in a 27-point blowout is “turning the page”, then I’d say the effort was a success.

#Gophers get the win in Illinois! pic.twitter.com/PW8rpoUjby

Mohamed Ibrahim had another record game, scoring four more touchdowns for Minnesota on over 200 yards rushing. Mo’s been great all season, though. This was a well-rounded team victory and the most exciting part was the Gopher defense.

The Gophers can play defense…

It’s true. I watched it with my own two eyes. The Minnesota Gophers have a defense and it’s even capable of playing sound football. They limited Illinois’ big plays, for the most part, and ruined the starting debut of backup Illini QB, Coran Taylor.

The Gopher defense racked up four sacks and only allowed 275 yards of total offense. They held the Illini run game in check and suffocated the pass game, limiting Taylor to 6/17 and 106 yards passing. That’s quite the turnaround from what they displayed over the first two games, where they gave up an average of 575 yards per game.

The @GopherFootball ground game was busy on Saturday afternoon, accounting for four touchdowns in the win over Illinois.

Ibrahim went off for a total of 224 yards rushing and 4 touchdowns. He went for 200 and 4 total TD’s last week. That’s the first time a running back has gone for back-to-back 200 yard and 4 touchdown games since Larry Johnson (Penn State) back in 2002.

He has everything you’d want in a running back and the Gophers are ready to ride him to victories in 2020.

Rashod Bateman had a huge game, too. He brought in 10 receptions and looked as comfortable and explosive as I’ve seen him through three games. He and Tanner really seemed to be clicking. Finished with 10 catches, 154 yards and this beautiful touchdown catch.

It’s his first TD of the season for @GopherFootball: pic.twitter.com/HEoHsVGoes

Tanner didn’t have the huge game I was hoping for, but he looked confident when he was called on to deliver the football. When Mo is going like Mo is going… why pass more than necessary?

This was the exact victory the Minnesota Gophers needed, before taking back to TCF Bank Stadium where they will host the Iowa Hawkeyes for the Floyd of Rosedale. Let’s see if a win in Illinois can be the turning point on this season.