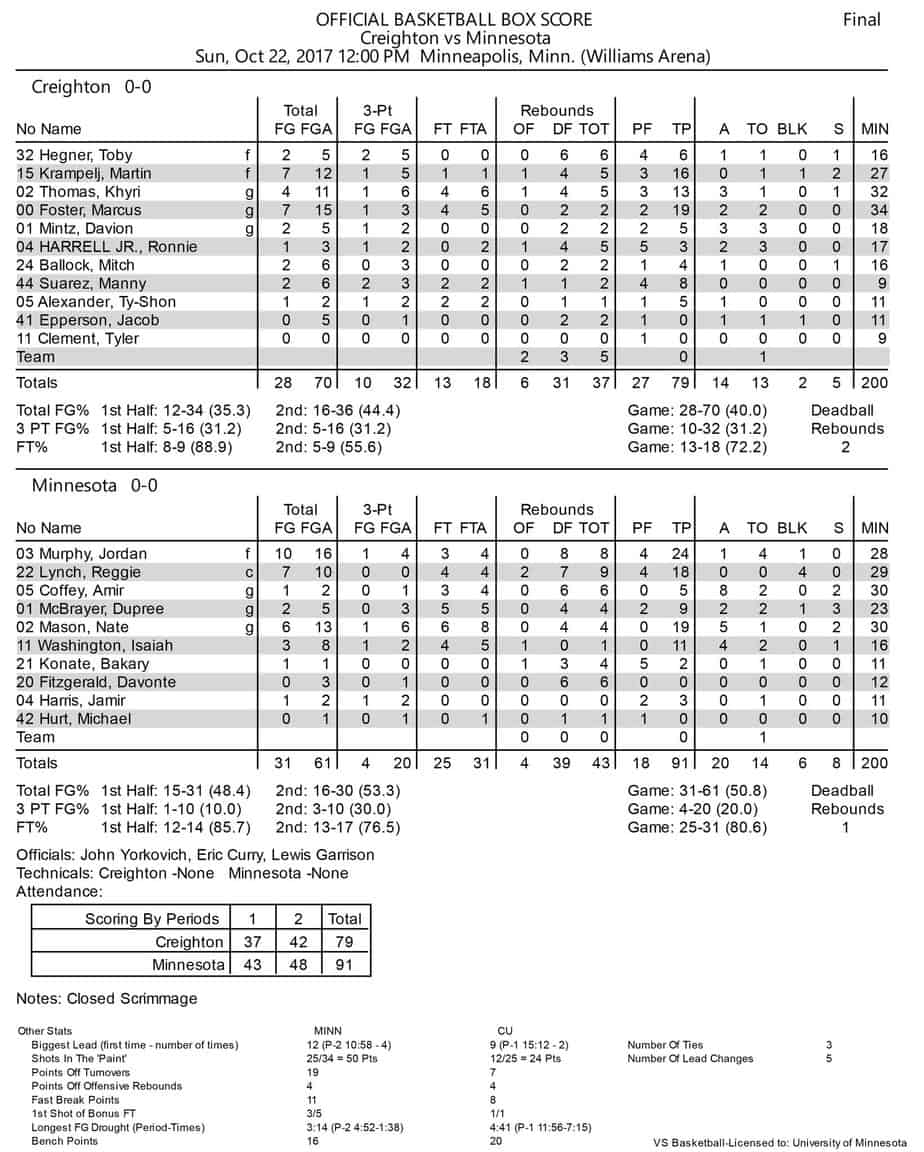 It’s never too early to start talking about college basketball. Especially when your team is entering the season with its highest expectations since at-least ’09-’10, maybe even ’97-’98, even though that season doesn’t technically exist.

The Gophers enter the season ranked 15th in the USA Today Coaches Poll. That is even higher than the ranking they got in 2009-’10 when they started 18th in that same poll. But, looked at even more highly than the Coaches Poll is the Associated Press Top-25 Preseason Poll. The Gophers haven’t ranked in the top 20 of that poll since 1993-’94 season. That is expected to release on November 1-2 so watch out for that.

That’s right, this Gophers team is projected to be better than any team in the last 24 years. Even in the mythical unicorn season of non-existence that is……. or is not 1997, the Gophers started at 22 in the AP Preseason Poll.

The Gophers played in a scrimmage on Sunday vs. Creighton, while we were all watching football. It was at the barn, in front of nobody. Apparently, according to Marcus Fuller of the Star Tribune, these scrimmages used to be “secret”. Obviously, impossible for anyone including the White House to keep secrets in this day and age, that’s not the case anymore. They still don’t let anyone in to watch though, including media.

Lucky for us, they do tweet out box scores after.

The starters played big minutes and, when looking at the playing-time breakdown, I would assume this is how we could have expected game 1 to go, if this would have been the season opener. Bench players would have had bigger minutes otherwise. Very interesting.

The first thing to notice is the minutes from guys who have been limited in practice this preseason. Lynch and McBreyer played significant minutes. Reggie didn’t foul out either, which is promising. Davonte Fitzgerald, who suffered a devastating knee injury that kept him off the floor last year, also played. He didn’t score but did grab 6 boards in just 12 minutes. He should be a big contributor to this team too.

Isaiah Washington only got 16 minutes, leading all bench players, but I would expect that to increase as the season moves along. In nearly half the time of most starters, Washington scored 11 points, ranking 4th on the team behind just Murphy, Mason, and Lynch. The rest of the bench was VERY underwhelming in both minutes AND production.  If you haven’t seen him play yet, you should watch this.

From the box, it looks like the offense ran through Senior, Nate Mason and Junior, Jordan Murphy; which we can expect throughout the season. But, let’s be real, with talent including Reggie Lynch and pre-season all-american Amir Coffey beyond those two, this team can get contribution from a lot of areas.

Just like this scrimmage showed, their biggest problem is going to be the 3-pointer. Nobody on this roster is your classic “knock-down” outside shooter, other than Freshman, Jamir Harris. I watched Harris a bit this summer while he was playing in the Summer League at De LaSalle HS, and he looked a little overwhelmed, with all of the D-1 and pro talent on the floor. But that is a VERY small sample size and not the best platform to judge. So, I’m hoping he can be better than what I saw. The Gophers could really use his shot with Akeem Springs graduating after last season.

The Gophers are above average in just about every other category. This is a team on the rise. I can’t wait to watch it all go down. And it starts VERY soon.