Can Royce Lewis and Carlos Correa Co-Exist in Twins Lineup? 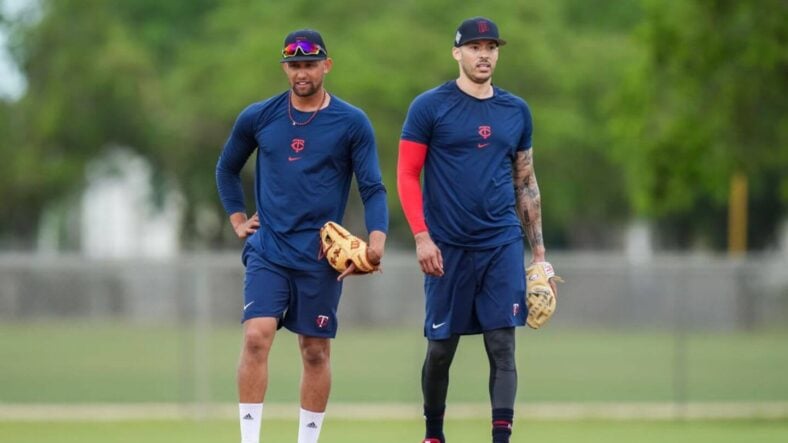 Royce Lewis, after a hot start at (AAA) St. Paul, was called up by the Minnesota Twins last week. This after starting shortstop, Carlos Correa, took a Bryan Baker fastball to his finger on May 5.

It was Lewis’ first call up so expectations were relatively low. A month of minor league success doesn’t guarantee anything in the big leagues. But for Royce Lewis, the transition has been pretty seamless so far. On Friday night, Lewis early success culminated in his first career home run. A 5th-inning grand slam that put the Twins up 11-2 and later proved the game-winner.

What a moment for your 1st home run, Royce! #MNTwins pic.twitter.com/sy10JQ3YSG

The Minnesota Twins pitching tried to give the game away, throughout. Griffen Jax saved the game in the 5th, holding the Guardians scoreless after Sonny Gray loaded the bases for him with nobody out. Unfortunately, Jax couldn’t save himself in the 6th and 7th innings and gave up four runs of his own before he was pulled.

But thanks to Lewis’ dinger, those runs didn’t matter and the Twins’ lead never came under real danger. When teams cleared the dugouts and fans exited the stands at Target Field, its new scoreboard displayed a relatively easy 12-8 victory by the home team.

Given all of the injuries Lewis has dealt with over the last couple of years, a season spent healthy and on the field would suffice as successful. But early on, he’s proven to be much more than that. In 24 games minor league games with the (AAA) St. Paul Saints, Royce Lewis hit .310 with 11 doubles, 3 home runs and a .993 OPS.

That was in the minors, though. The big leagues are a different monster and success against major league pitchers wasn’t a given. But since his call up on May 6, Lewis has played 7 games and exceeded even the highest of expectations. He’s made a few great plays at shortstop and looked even more capable at the plate.

After Friday’s contest vs Cleveland, Lewis is hitting .320 (8/22) with the Twins, his OPS .844. All four of his RBI came from his grand slam last night but he’s been hitting the ball hard every time out. His homerun on Friday wasn’t even the hardest ball he hit on the night. That belonged to a 114 MPH fireball in the 2nd inning that nearly ripped Jose Ramirez’ arm off of his body. It was the hardest ball hit by any Twins player this season.

The better Royce Lewis continues to play, the more difficult it will become for the Twins to send him back down to (AAA) St. Paul. We’re yet to hear whether Carlos Correa will be ready to return when he’s first eligible on Monday (May 16).

Correa wasn’t able to swing a bat when he went on the injured list just four days ago (retroactive to May 6), so his short-term availability is certainly in question. But even if the Twins $36 million man isn’t ready quite yet, he’s expected to return sooner, rather than later.

If Royce Lewis continues to prove one of the better hitters in this lineup before, it will be very difficult for the Twins to send that offensive production back down to St. Paul.

As good as Royce Lewis has been at shortstop, he can’t hold a candle to Carlos Correa’s platinum glove and rocket arm. Plays that Correa makes look easy, take all of Lewis’ effort and concentration to complete. After watching Royce Lewis up close, I still have a lot of questions about his long term prospects as a shortstop.

But there’s a problem with moving him elsewhere. He doesn’t play another position. Royce Lewis has spent 2,562 innings at shortstop during his minor league career and just 17 innings anywhere else. Does that mean it would be impossible?

No, shortstop is the most difficult position on a baseball field. Prevailing wisdom says he should adequate just about anywhere else. But this isn’t high school, college or even the minor leagues. Learning a new position at the MLB level, where there is no room for mistakes during adjustment, is a lot to ask a 1st-time major leaguer who never changed positions at lower levels.

First base would be the easiest move, if the Minnesota Twins decide to make one. With Miguel Sano’s failure, first base doesn’t have an everyday starter, either. Jose Miranda wasn’t ready for his call-up. So if Twins brass keeps Royce Lewis up after Correa’s return, 1st base could make the most sense defensively.

Moving Royce Lewis to 1st base would be asking a lot. Anywhere else makes less sense. Polanco is the second baseman and Gio Urshela (third base) has been one of the Twins’ more consistent performers, both at the plate and in the field.

Could they move Royce Lewis around to where he’s needed, much like Luis Arraez does now? That would be a difficult ask. Arraez is already excelling as a utility player and throwing that type of defensive inconsistency at a rookie without experience in that role, would be setting Lewis up for failure.

There’s one important thing to remember, when having this conversation. The Minnesota Twins don’t usually view these scenarios in a present tense. Royce Lewis may help the Twins win now but is keeping him in the big leagues and changing his position what’s best for HIS development?

Not if Falvine and Baldelli still see Lewis as their future shortstop. If so, then moving him for the sake of winning games in May is unlikely to be seen as worth it. For that reason, I’d imagine Royce Lewis is sent back across the river when Carlos Correa is cleared to return. Either way, Lewis isn’t sweating the small stuff and that’s good to see.

Royce Lewis, on if he’s trying to force the #MNTwins hand to keep him in the big leagues:

“No. No. Not at all. My goal is to continue to grow each and every day and have fun playing the game that I love. It doesn’t matter where I’m at.”

But I hope he makes that send down a painful one for Baldelli and the front office.