Bomba Squad Out Bomba’d in Milwaukee 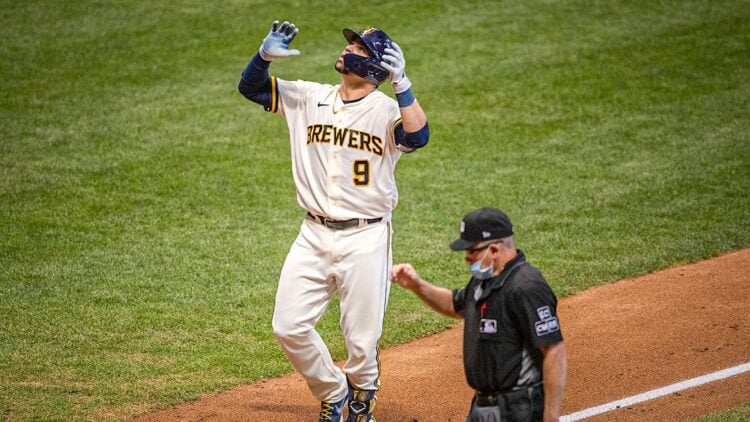 Bombas…and lots of them tonight. They didn’t all come from the Minnesota Twins, though, so that’s a problem. Do we still call those Bombas? After getting back in the win-column Monday, Baldelli and Co surrendered four long balls (including a devastating one late), during a 6-4 loss Tuesday to the Milwaukee Brewers. The Twins, now 11-7 on the season, see their lead in the AL Central shrinking fast. They now sit atop the Detroit Tigers by just .5 games.

The game started with a bang. Jorge Polanco took the first pitch he saw, a four-seam fastball, for a home run. With Josh Lindbolm has thrown fastballs 35.8% of the time so far this year. Baldelli said in his pregame presser than his hitters would look to key in on fastball early in counts.

It paid off immediately, when Eddie Rosario went deep for another solo shot. That gave the Twins 20 solo shots (out of 28 home runs total) on the season. Not ideal, but runs are runs I guess…

Back to the note from @MillerStrib :

But Rosario wasn’t done there. Homering again in the in the third, this time a two-run blast, to give the Twins a 4-1 lead. Showcasing the increased patience at the plate he has developed from last year.

Oh Eddie is en fuego! 6th homer of the year and third in last two games.

His plate discipline has been much improved and it’s showing! #mntwins pic.twitter.com/JuDtxyJsyw

Bombas weren’t the only positives from this game though. Buxton found a way to get three hits, including two infield singles, while the bullpen found a way to keep the Brewers relatively punchless for most of the game. This included Cody Stashak showcasing better command after “the worst outing of his career” (according to Dan Hayes – Athletic) and Matt Wisler efficiently working through 2.2 innings.

Cody Stashak used a 92 mph fastball up and away to setup his 83 mph slider down and in to get a strikeout here.#MNTwins pic.twitter.com/VG34xLoFNL

Yet the Twins still ended up losing the game after being up 4-1. A reoccurring theme so far this year. Score runs early and then taper off in the later innings. Giving up four bombs to the Brewers, including two to catcher Manny Pina and a death-dealing blow in the eighth to Jedd Gyorko.

Gyorko’s home run came at the hands of Taylor Rogers. While it wasn’t a save situation, it is still frustrating for Twins fans to see their stopper surrender runs at an alarming rate over the last week.

Gyorko with the game-winning HR for the Brew Crew!

On top of that, Luis Arraez struck out multiple times, in consecutive games, for the first time in over two years. He was playing Class A ball in Fort Meyers the last time he did that. After striking out just 26 times in 92 games last year, Arraez already has 8 Ks in 15 games this season.

TIME TO WIN THE SERIES

While not an ideal outcome, after jumping out to an early lead, the Twins still have a chance to win the series tomorrow against the Brewers. First pitch is scheduled for 6:10 pm. It will be Kenta Maeda (2-0, 2.65 ERA) dueling Eric Lauer (0-1, 9.53 ERA).

Maeda has 16 strikeouts in 17 innings (3 starts). He is heavily utilizing his changeup and slider vs years past. This has lead to a decreased walk rate and higher whiff rates. With so much of the bullpen being utilized today, Baldelli is hoping to see Maeda go seven innings.