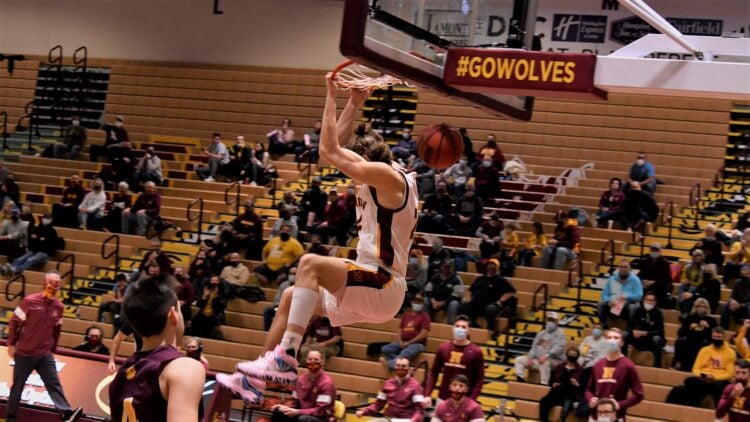 Ben Johnson was brought in as Minnesota Gophers men’s basketball coach because of what Mark Coyle thinks he can do as a recruiter at the high school level, specifically in Minnesota neighborhoods. But before he can dive head first into that part of his job, he has to rebuild a team he’s inherited that was lacking depth even before they lost three players to the transfer portal.

But the portal isn’t all bad. In fact, Ben Johnson and fans across the state are hoping the new coach’s talents and connections recruiting at the high school level will translate to doing the same thing out of the transfer portal. Reports have already surfaced connecting the Gophers to multiple transfer portal targets.

As expected, Ben and the Gophers are already working on a few of the many talented players in the transfer portal who originated from the Minnesota high school scene. The kids Richard Pitino missed on.

Ish El-Amin graduated from Hopkins high school in 2017, as a 3-star prospect, and enrolled at Ball State University. He came off the bench during his freshman and sophomore seasons, before really taking off as a junior. Ish entered the transfer portal before his senior season too but actually landed back at Ball State where he started.

The Cardinal offense relied on him more during his senior campaign. Between that, the pandemic and anything else that may have caused him to enter the portal before the season started, his efficiency took a hit. El-Amin’s field goal attempts jumped from 11.2 per game to 14.1 but his field goal % dropped from 43% to 40% and his 3PT % from 39% to 32%.

But Ish fits exactly what the Minnesota Gophers need after Carr and Mashburn departed. El-Amin told Ryan James (GopherIllustrated.com) that Minnesota head coach Ben Johnson has already called him and shown interest. No offers have been made, yet and Ish has one other (Rhode Island). When you read his quotes on GI and see what the former Hopkins star has been liking on Twitter, his interest in finishing his career with the maroon and gold becomes quite obvious.

“Just being able to be back in front of family and my city, playing the game I love, while repping my state on my chest.”

BSU men's basketball hung tough with Northern State yesterday, but the Wolves showed today why they're the #7 ranked team in the country

Had a fun chat w/ ex Mahtomedi HS/Northern St. stud F Parker Fox. He’s No. 24 in this video. He’s heard from over 100 schools, multiple levels, since entering the transfer portal on Fri. Butler called during our Zoom. One of the best D2 players in country. pic.twitter.com/uRHFvXQQMW

Parker Fox is the 2021 DII sensation. He was a high school track star who didn’t want to run track in college. So, he took the only basketball scholarship that was offered him. It was from Northern State University, out of South Dakota. He calls it the best decision of his life.

After redshirting his freshman season, Fox came off the bench as a 10 points, 5 rebounds contributor on a nightly basis as a redshirt freshman. Then, in his redshirt sophomore season (2019) he blew up. He jumped to 20 points and 9 rebounds per game and hit 36% from 3PT (shot 11% as a freshman).

After more improvement (22.1 PPG, 9.8 RPG, 3.2 BPG) as a junior, Parker has caught the eye of over 100 DI basketball coaches, including Ben Johnson. In fact, Johnson was calling Fox before he left Xavier (according to 247Sports). Where does the Mahtomedi native want to play for his last two years of eligibility?

“I am hoping to hear from Minnesota, they just hired their new coach today,” he said. “Minnesota is home, they just hired Ben Johnson today, he’s a Minnesota dude. He reached out to me at Xavier so hopefully I am ablate connect with him through Minnesota as well.”

“He was one of the first ones to reach out and introduce himself and tell me that they’re interested in my game and to hopefully form a relationship,” Fox added.

Make it FIVE threes in a row from Jamison Battle! pic.twitter.com/tGveJy9mPP

Jamison Battle is a sharpshooting transfer portal wing out of George Washington. He’s only played two years of college ball and one didn’t count against his eligibility. That means Battle will enter his new school as a sophomore, by basketball eligibility standards.

During his two seasons out in DC, Battle started 45 of 47 games and averaged 36 minutes per night. He has a career 3PT % of .363 and averaged 17 points per game as a sophomore. He gobbles up 5 rebounds per game, to go along with his outside shooting.

Calling Jamison Battle a perfect fit for Ben Johnson and the Minnesota Gophers would be a major understatement. Battle and Johnson both graduated from DeLaSalle high school, the Gophers desperately need shooting help and Ben wants to recruit shooters, which he made very clear in his introductory press conference.

If you’ve watched Minnesota play basketball during the Pitino tenure and you saw him destroy elite shooters like Gabe Kalscheur, any talk of improvement is welcomed conversation.

Battle is very interested in coming home and had his second conversation, a zoom call, with Ben Johnson on Thursday (per Ryan James of GI).

“Being able to play at home is something that brings a lot of interest to me,” Battle told GI last night. “I’ve been watching the Gophers since I can remember, so playing at home would be something that would be really cool.”

“Since he got the job I’ve only talked to him once, but we have a zoom set up for tomorrow (today). In the short conversation we had, he seems so upbeat and energetic and ready to take Minnesota to the next level.”

How good are these dudes?

This is a worthy question because all of the Minnesota kids listed above are transferring out of smaller schools. It’s unknown whether any of them are capable of starting at the Big Ten level for a successful team. Still, they all feel like guys who could provide valuable minutes off the bench, at the least.

But with that being said, only so many scholarships are available and Ben Johnson will surely want to keep a few for the 2022 class coming out of high school next year. The transfer portal is already bulging at the waist with all of the kids who have entered.

I expect Ben to get his assistant coaching staff settled so they can get a grasp of what they want to do before we see offers being thrown around. But no matter… the next couple of months are going to be a recruiting rollercoaster that Minnesota Gopher fans didn’t know anything about until PJ Fleck landed in Dinkytown. I have a feeling the basketball coaster will be just as much fun to ride.