Adam Thielen finished his break-out 2017 regular season with 1,276 receiving yards. That equates to 72.5% of a mile for the track and field minds out there.

With 6 catches vs. the Bears, The Detroit Lakes native closed the 16 game slate with a career best 91 receptions. His 5th grab on Sunday (90th for the season) resulted in a $250,000 bonus.

250K Bonus for Adam Thielen. Not bad for an undrafted guy from Minnesota State Mankato, who was almost a dentist assistant…

On a day where the Vikings picked up “two wins,” the Pro-Bowl WR snagged three victories. Hat-Trick. Mikael Granlund style. Helping the team win, while clinching a playoff bye, and adding a cool quarter-million bonus? That made up a pretty productive afternoon for the Mankato State grad. 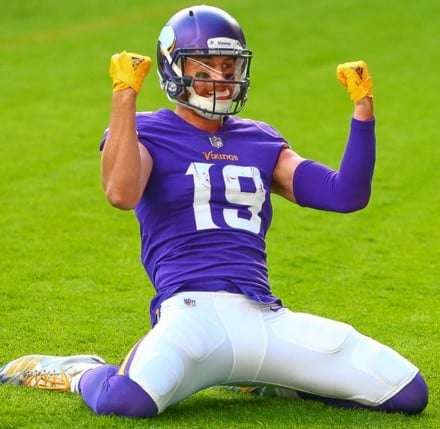 Thielen signed a new deal in March of 2017 worth a guaranteed $11 million. On the surface, that sounds like a lot of money. However, considering his on-field production, this agreement is straight out of the bargain bin. On behalf of Minnesota fans and I’d imagine Mrs. Thielen, we’re glad he was able to pad his bank account.

The Vikings WR’s 250K story was part of Sunday night’s SportsCenter episode. The segment included other NFL players’ with down to the wire incentive based scenarios. Here are two of them:

LeGarrette Blount (PHI – RB)
Entering Sunday, Eagles RB LeGarrette Blount was 21 yards short of 750 yards on the season. Per his contract, if Blount reached the 750 yard plateau, he was in store to receive a nice little $300,000 kicker.

Despite the fact that Philadelphia was shutout at home, the 31 year-old finished the game with 37 yards on the ground. Nice! Get paid! He’s come a long way from this chaotic moment:

Eric Weddle (BAL – FS)
Someone had to leave cash on the table, right? That’s correct. Unfortunately for him, that someone was Eric Weddle.

Per his contract, the safety would have gained $1,000,000 if he could have parlayed a Pro Bowl selection with a Ravens Playoff appearance. After already accomplishing the former, Weddle was primed to earn the extra million dollars if the Ravens didn’t blow Sunday’s game vs. the Bengals.

The Ravens needed to stop the Bengals on 4th and 12 to clinch a playoff spot.

Then this happened, ending the Bills’ 17-year playoff drought: https://t.co/FFybfYeB20

Just like that, John Harbaugh’s team is done for the season. Just like that, Eric Weddle’s potential New Years Eve pay-day has passed. Dust in the wind.

One can’t discuss the topic of athletes barely hitting or missing contract incentives without mentioning Maurice (“Moe”) Harkless. The NBA role-player is the king of this category. Actually, Moe saw this one coming well before game number 82. During the year’s first 20 contests, he was averaging just under 4 three-point attempts a night. Over his final four games, he only attempted 1 shot from downtown.