The 5 Best Celebrations of the Vikings Season 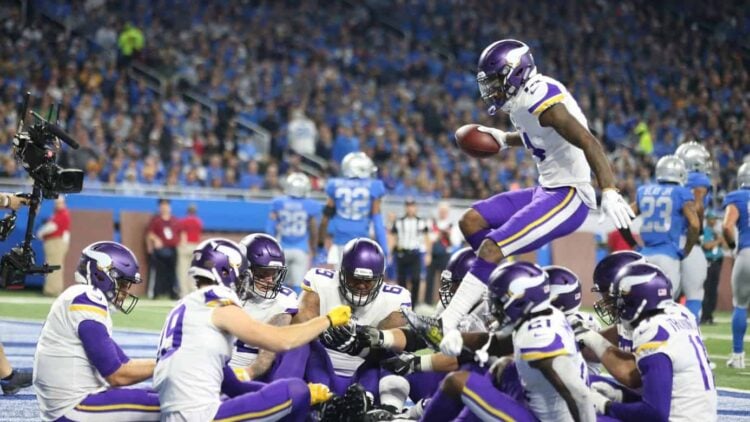 Your Minnesota Vikings beat the Detroit Lions yesterday, 30-23. The Thanksgiving day win moved the SKOL to 9-2 overall. They will enjoy ten days of rest before facing the, “We should be Super Bowl Champions but we choked ourselves out in the 4th quarter”; Atlanta Falcons, on December 3rd.

The Vikings and their fans, are feeling themselves a little right now. Rightfully so! Coming into this week, NFL.com had MN 4th in their power rankings. Some people are even going as far as calling them the best team in the league. Whatever your opinion, there’s one thing that can’t be argued: Mike Zimmer’s boys are definitely Celebration Bowl Contenders.

As you probably know, the NFL (once called the “No Fun League”) decided to loosen its rules on player celebrations for 2017, and possibly beyond. It’d be interesting to see if they would’ve made the same decision, knowing the types of celebrations the players had in mind? Either way, it’s been entertaining for fans and has certainly been a bright spot for the 2017 NFL, who’s ratings continue to dip.

CASE KEENUM WILL DO IT HIMSELF!!

Then the entire @vikings offense joins him for a Thanksgiving meal ?? pic.twitter.com/HY6JhMgmuv

THE THANKSGIVING SPECIAL! Classic. After Case Keenum’s 9 yard TD Run, the offense sat down to enjoy a quick victory meal. Our QB ate that imaginary turkey leg like an absolute savage. If you listen carefully, someone yells “Who has the stuffing?”

We can talk Falcons in a few days. Just like the players, Purple Pride Nation needs to enjoy a couple of stress free days. Relax our mind and bodies, before getting back to the football grind next week. To help get this accomplished, I’m proud to present:

Everson Griffen’s wife gave birth to a baby boy before yesterday’s kickoff. He watched the birth via FaceTime. Technology, man… After sacking Matthew Stafford in the first half of the game, Everson lifted up his shirt. It read “I just had a baby boy, what I should I name him?” Between this, getting crunk, and the sack-streak, it’s obvious why the DE is among the fan favorites. It wasn’t a touchdown, but still worth pointing out.

After an Adam Thielen touchdown vs. Washington, the majority of the offense took part in a quick game of leap-frog. People are going to complain that this should be higher than fifth on this list. It was great form and choreography, don’t get me wrong. The creativity factor just wasn’t there on this one. The kid games act is to mainstream these days. We started it and everyone followed. It’s time to start a new trend.

What now seems like an eternity ago, Dalvin Cook was the center point of our offense. The rookie from Florida State was playing at such a high level before going down with a torn ACL. Prior to getting hurt, he found the end zone in our first meeting with the Lions. At that point, Cook starting Cooking. My favorite part of this one is Diggs tossing in the spices. I’d pay to watch him do that in my kitchen.

Simply genius! You don’t need all the theatrics for a great celebration. You don’t need all ten of your teammates to get involved. Creativity is the most important aspect. When we played vs. Cleveland in London, where Fútbol rules football (unfortunately for them*), Thielen celebrated like a natural soccer player. GOOOOOOOAAAAAAAL!

We touched on this one at the begining. Creativity points through the roof. Diggs confused me a little bit jumping into the middle. I get what he was doing, but execution could have been a littler better. Maybe if it was a little more smooth, yesterday’s TD celebration might have found itself in the top spot.

If I had to choose between a Holiday reference or (what I’m imagining is) a tribute to Minnesota, give me the 10K Lakes every day. Thus, Duck, Duck, Grey Duck takes the top spot. The homage (I’m imagining was) paid to the home state in this one, made me a little sentimental (again, imagination: Rudolph calls it Duck, Duck, some other winged creature). Apparently other parts of the country call the game something else… I can’t think of it at the top of my head… Others can call it whatever they want. We know what’s correct. And, it makes a GLORIOUS touchdown celebration.

I can’t wait to see what they have in store for us the rest of the season. Speaking of that, Thielen and friends were about to bust something out after his 65 yard TD vs. the Rams. He has to be saving that one for a later date. Any guesses as to what it is? I’m going with four square. That’s what it looked like to me. Our stud WR was about throw up a “cherry-bomb” just like he did on the Detroit Lakes playgrounds.